There is much discussion about the best way to develop youth players in America and Europe. Often we forget that Africa and Asia are a growing source of players for European clubs.

Consequently, we do not realize that there is a battle for talent in these countries. The result can make even the most dedicated fan uncomfortable talking about. Enter Sebastian Abbot with a must-read addition to any soccer fan’s library. His new book is about developing young talent in world football today.

The Away Game: The Epic Search for Soccer’s Next Superstars is the story of African soccer players struggling to escape the continent in search of a career in European football.

Abbot focuses on the Aspire Football Dreams program. An initiative from Qatar that aims to find the best young talent in Africa and develop it for eventual sale to European clubs.

The book highlights how the program hired Josep Colomer, former youth director for Barcelona who helped guide a young Lionel Messi to stardom. It is clear Colomer seeks to make his mark in the sport by discovering the next Messi, as the final goal of a storied career. He views Africa as an untapped resource for the next superstar.

The book charts the program. In particular, Abbot focuses on five players who find various degrees of success.

On one end is Diawandou Diagne, a natural leader and defender who uses the program to launch a pro career in football. On the other end is Bernard, a smooth playmaker who Colomer compares to Messi. Throughout the book we discover the players’ issues and the struggles of the Football Dreams program. It is alleged to have recruited African players to naturalize and play for Qatar.

There is much to praise about this book. The key element I want to highlight is how even-handed Abbot is in his treatment of his subjects.

There are many moral and ethical issues that pop up in this book. For example, African players lying about their ages, Qatar potentially exploiting poor Africans. And lastly, the shady underbelly of European clubs signing underaged African players.

A lesser writer would be derailed by these controversies or rant about them in a way that biases the story. Abbot instead treats them all with a journalistic detachment that allows the reader to understand the enormity of the issue but not take the focus off the personalities that make this book so rich. Over 300 pages, the reader learns so much and becomes aware of some of the biggest ethical issues facing soccer today.

Not since The Fix has a book become a must-read for soccer fans who are concerned about the business model of the game. Sebastian Abbot has written a classic that rightfully earns all the praise it is receiving. 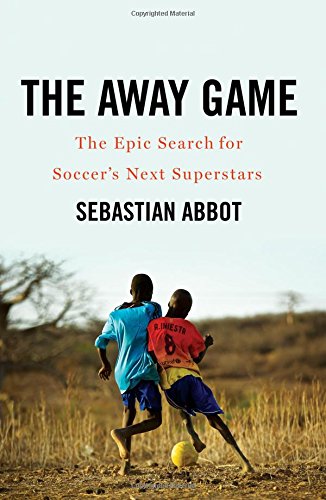 The Away Game: The Epic Search for Soccer’s Next Superstars