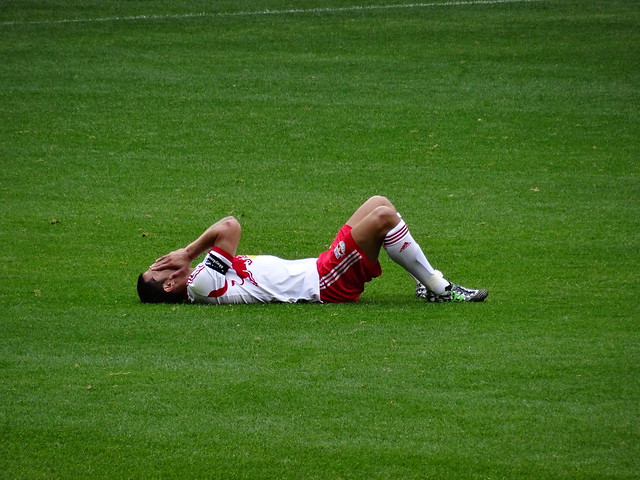 Last night, the New York Red Bulls sought out their first win of the season. They got it in a 2-1 victory over Philadelphia Union on a cold night in a thinly attended match.

As my son and I drove home from the game, he said something that is only half true. “It’s not whether you win or lose, but how you play the game.”

There is a quote that is drawn from Eduardo Galeano’s excellent book Soccer in Shadow and Sun that is used so often that you might think it is the only good line in the book. It is not, but it is worth redrawing here. “I am a beggar for good soccer,” he writes. “I go about the world, hand outstretched, and in the stadiums I plead: ‘A pretty move, for the love of God.’”

After the game last night, we put our chilly, empty hands in our pockets.

Last night’s game, coming on the heels of a Reuters poll released on Monday and yesterday’s announcement of the MLS expansion franchise in Atlanta, was a physical display of these crossed signals. Passes were imprecise and the Red Bulls shots appeared to offer no real threat to the Union keeper. These mixed signals show up a problem, as he and I see it, with the sport. We sit in the second level above the corner flag and watch a game threaded with a running commentary from the fans around us, and what is pointed out through the things we hear are worth examining.

What the Reuters poll found was that two in three Americans don’t plan on following the World Cup. It’s not that two in three don’t plan on attending these matches that are going to be played in the same hemisphere. That is understandable. What is troubling is that the poll finds that two thirds of Americans don’t anticipate the event impacting their habits enough to watch it. Only 7 percent of those polled plan on following it ‘closely’. Poll results, like potato chips, can be taken salted heavily or lightly, and the fact that they cite 86% of Americans as knowing either nothing or just a little bit about the World Cup seems like it should be taken with a lot of salt, the message stands.

Last night we watched a demographic played out around us. The arena quiet with less than 15.000 fans in a venue that seats 25,000. Not bad for a Wednesday night game you’d think except that the public schools are on recess both in New York and New Jersey, adding teeth to that number. Behind us, a father asks his kids what is happening on the pitch. That he has brought them is a start, and that they seem to have committed to season tickets since they were there the last game, belies a commitment that the MLS can capitalize on in cities like New York, where families are priced out of most sporting events. His questions point up an age group that has little experience with the game, and a reliance on youth to drive the sport forward through their kids who are playing.

Last night the fans walked away with a win, but it wasn’t good soccer. The Red Bulls continue to draw attention to their defensive gaps. The reputations of Jamison Olave and Armando, who was substituted on after Ibrahim Sekagya was red carded for handling the ball in a chain of events that led to Philadelphia halving the Red Bull lead on a penalty kick, make them easy targets. Passes too far ahead of intended targets, or just behind don’t serve the team trying to pick itself up and truly enter the season with a win. Poll results like the one conducted by Reuters point up an imprecision in thinking. We can dream of a beautiful game on the pitch, but until it happens, it is just a dream. We can look at a league’s expansion and growth to new markets with excitement. This poll and the thin crowd shows that it might be as baseless as that dream.