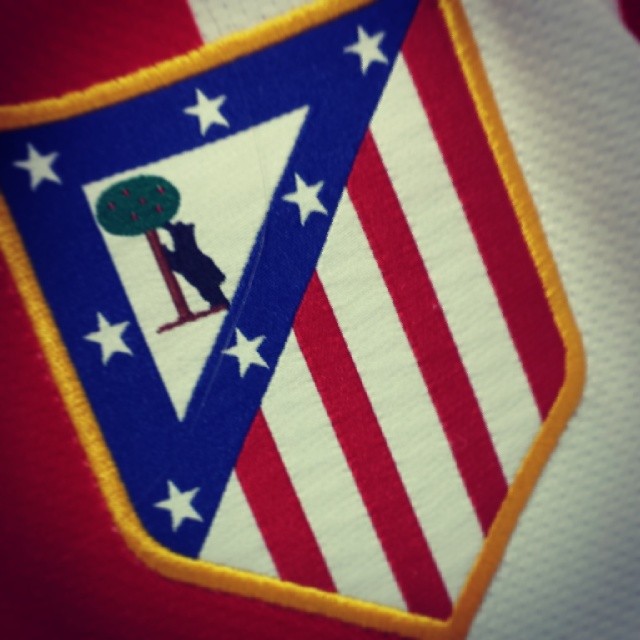 It’s “as you were” at the summit of La Liga as the top three all won once again. Athletic Madrid overcame Villarreal, Barcelona beat rock-bottom Betis and Real Madrid won well at Real Sociedad. Atleti are a point ahead of Barca, who in turn lead Real Madrid by two points with just six matches to go.

Atletico Madrid cemented pole position for another week with a 1-0 win over Villarreal at Vicente Calderon, but Diego Simeone’s men were made to work hard for the three points. Raul Garcia headed in the only goal of the game after 14 minutes, but the hosts created few further opportunities and spent the latter stages holding on under pressure from Villarreal.

Barcelona produced an unconvincing display against Real Betis but still beat the bottom side 3-1 to maintain the pressure on Atleti. Lionel Messi opened the scoring from the penalty spot after 15 minutes and the unfortunate Jordi Figueras, who had conceded the spot-kick, doubled Barca’s lead with an own goal midway through the second half. Ruben Castro quickly pulled one back for Betis but Messi struck again in the 85th minute, reacting quickly to having a penalty saved to score from the rebound and seal the three points.

Programming note: For viewers in the United States, La Liga games are shown exclusively on beIN SPORT, beIN SPORT Espanol and DishWorld. Even if you don’t have a TV subscription to beIN SPORT, you can access those channels via online streaming service DishWorld for $10/month. Read our review of DishWorld. And sign up for DishWorld via their website.

Real Madrid’s 4-0 victory over Real Sociedad at Anoeta was a lot more difficult than the scoreline suggests as Los Blancos maintained the pressure Atletico and Barcelona. Goals from Asier Illarramendi, Gareth Bale, Pepe and Alvaro Morata ensured Madrid left San Sebastian with three points. Illarramendi opened the scoring against the run of play on the stroke of half-time, his first goal for Madrid coming against his former club. Bale doubled the lead on 66 minutes after a fluffed clearance by home goalkeeper Claudio Bravo presented him the ball on a plate. Late strikes from Pepe and Morata gave the score a flattering look but Madrid deserved their win.

Athletic Bilbao won 2-1 at Levante to maintain their stranglehold on Champions League qualification.  A first-half double strike from Artitz Aduriz was enough to seal the points for the Basques as the striker took his goals tally for the season to 11. Levante gained a second-half lifeline when Athletic defender Mikel San Jose deflected Ruben Garcia’s crosses past Gorka Iraizoz and into his own net, but Athletic were comfortable winners.

Sevilla cemented their grip on fifth place in La Liga as they swept aside Espanyol 4-1 at Ramon Sanchez Pizjuan. Stephane M’bia netted his first goal in over four months to open the scoring, and Kevin Gameiro doubled Sevilla’s advantage on the stroke of half-time. Sergio Garcia’s penalty reduced the arrears for Espanyol after Christian Stuani had been fouled in the area by Federico Fazio at the start of the second half, but Gameiro struck again with five minutes remaining and Ivan Rakitic added his 12th of the season in the final minute. Their win sees Sevilla remain fifth, three points clear of Real Sociedad.

Real Valladolid climbed out of the relegation zone after holding Valencia to a goalless draw at Jose Zorilla. The hosts had goalkeeper Jaime to thank for keeping the game goalless, despite Valencia’s superiority. The veteran No. 1 repaid coach Juan Ignacio Martino’s faith in him by pulling off a string of saves and denying Los Che’s Paco Alcacer several times. The result means Valladolid move a point clear of 19th placed Almeria and are level on points with Getafe.

Malaga notched their first home win in two months with an emphatic 4-1 victory against Granada, a first-half brace from Nacho Camacho setting Bernd Schuster’s men on their way. Youssef El Arabi saw his penalty saved by Willy Caballero just before the break to deny Granada a way back into the game and the home side capitalised with a third from Nordin Amrabat’s spot-kick after Jeison Murillo fouled Camacho. Substitute Juanmi completed the rout, before El Arabi made amends for his earlier miss by netting 12 minutes from the end, but it was scant consolation. The win takes Malaga up to 11th while Granada are 15th, three points clear of the relegation zone.

Elche gained a vital victory over fellow strugglers Getafe as Richmond Boakye struck with the final kick of the game. The two sides looked destined to share the points as the game drifted into stoppage time with the score remaining goalless, but on-loan Juventus striker Boakye made it 1-0 by heading in Carles Gil’s cross. The victory eases Elche’s relegation fears but Getafe, who had the better of the chances during the game, drop into the danger zone.

Rayo Vallecano cruised to an important 3-0 win over Celta Vigo to maintain their revival and ease their relegation fears. Rayo went into the game just three points above the drop zone but are now ensconced firmly in mid-table, level with Celta. Ruben Rochina scored the opener in the 26th minute and a second-half double from Alberto Bueno meant Razvan Rat’s 64th minute straight red card for violent did not influence the outcome.

Osasuna did their hopes of survival a power of good with a 2-1 victory at fellow strugglers Almeria. Both teams started the game in the bottom three, but it was the Pamplona side who clinched the points. They are 16th, but only two points clear of safety. Oriol Riera set the visitors on their way in the 19th minute and Alejandro Arribas doubled their advantage 13 minutes later. Fernando Soriano pulled one back against his former club 17 minutes from the end, but there was no way back for Almeria, who had Rafita dismissed for two stoppage-time yellow cards.

Based in Cambridge, UK, Michael is a freelance football writer, currently working for Football-Espana and the North American magazine Soccer 360. Previously a news and feature writer for A Different Liga, he has written for Uefa.com and Football-Italia and writes features for the matchday magazine at Cambridge United FC, where he has held a season ticket since 2003.