Srdjan Lakic Puts Koln To The Sword With A Brace.

Gladbach opened the day against relegation play-off winners Nurnberg, who defensive stability earned them a point in this match. Nurnberg opened the scoring through midfielder Jens Hegeler, but Gladbach equalized on the half-hour mark through striker Mohamadou Idrissou. While Gladbach had the majority of possession, they were unable to break down a resilient Nurnberg back-line to clinch a winner. Not a bad result for either side at the end of the day, Nurnberg will feel they should have come away with three points, especially after some great chances early on.

FC Koln, who can boast the talent of German national team striker Lukas Podolski as well as many other household names, got absolutely thrashed in front of their own fans by newly-promoted FC Kaiserslautern. Despite going down to ten men after Youssef Mohamad was sent off just two minutes into the match, Koln took an early lead through Novakovic after a goalkeeping howler from Tobias Sippel. Kaiserslautern came back in fantastic fashion and smashed in three of their own late into the match. A brace from Srdjan Lakic and a third from Ivo Ilicevic sealed a fantastic win for FC Kaiserslautern in their opening fixture. Certainly an ominous sign for the Koln faithful.

Hannover defeated Frankfurt by two goals to one despite having so little of the ball throughout the match. While Frankfurt bossed the game in terms of possession, they were unable to create very many goal-scoring chances and it was their lack of cutting edge that ultimately handed Hannover the win. Goals from Konstantin Rausch and Didier Konan secured three points for Hannover.

Relegation candidates Freiburg and St. Pauli faced off in one of the biggest matches of the weekend. Both teams would have known that a win today would be priceless in terms of where each side may finish the season. At the end of the day, it was St. pauli who secured what will be a vital three points. A second-half flurry saw Freiburg take the lead through Papiss Demba Cisse, but Freiburg could not hold out for a win. It was St. Pauli who shot to life with just seven minutes remaining on the clock. Goals from Fabian Boll, Richard Sukuta-Pasu and Fin Barthels secured three vital points for St. Pauli and an opening day win that fans of the kult club will not forget.

Werder Bremen travelled to Hoffenheim after their mid-week victory over Italian outfit Sampdoria in a Champions League qualifying tie, and would have expected a win at the Rhein-Neckar-Arena this afternoon. After a Torsten Frings penalty just three minutes into the match, Werder Bremen would have been almost sure the win was in the bag. Unfortunately for them, Hoffenheim bounced back with four goals before the half-time whistle and Werder Bremen 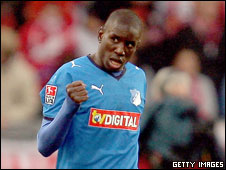 Demba Ba Shot His Side To A Memorable Victory Over Werder Bremen.

didn’t know what hit them. Demba Ba, Peniel Mlapa, Vedad Ibisevic and Sejad Salihovic all got themselves on the scoresheet and swept past a Werder Bremen side who just couldn’t find their way back into the match. While Bremen players may have had one eye on their mid-week return leg with Sampdoria, they will know that a lot more will be expected of them throughout the season. Sampdoria will fancy their chances.

In the most glamorous tie of the weekend, Hamburg hosted Schalke in a match that would see Ruud van Nistelrooy and Raul face off after both being star players for Real Madrid in the past. Raul’s debut was marred with a defeat as ex-teammate Ruud van Nistelrooy bagged a brace for his side. Raul only completed an hour of the match and then was substituted. The ex-Madrid man will take some time to settle into Bundesliga life, and goals will be expected of him this season.