Will the tandem of Juan Francisco Martinez, commonly known as Nino, and Alejandro Alfaro translate their scoring prowess from the Segunda División to La Liga?  After seven seasons in the Segunda División, Tenerife secured promotion in their penultimate match 0-1 over Girona.  With an average start of 6-2-6, equaling twenty points from the first four months of the campaign, they went an impressive 18-7-3 in the final twenty-eight matches, narrowly missing the league title by one point.

Nino and Alfaro led the second best attack in Liga Adelante with a combined forty-nine of the seventy-nine goals Tenerife scored, with Nino winning the Pichichi with twenty-nine goals.  Also in favor of Tenerife was the relative constancy of the starting eleven.  Captain Manolo Martinez had the fewest starts of the outfield ten with thirty-one, so manager José Luis Oltra could rely on his players to be available every match day.  Starting goalkeeper Sergio Aragoneses put in a solid first half of the season, only conceding sixteen goals in nineteen matches; however, a bout of acute pancreatitis struck him in the middle of the season, causing him to miss the remainder of the campaign.  Luis García deputized for the rest of the season.

Reinforcements were necessary in case anyone within the first eleven sustained an injury.  Midfielder Román Martínez arrived on loan from Espanyol, Cameroon striker Serge N’Gal moved on a free transfer from Gimnàstic de Tarragona, and Aitor Nuñez left Atlético Madrid to sign with Tenerife.  Despite these summer transactions, the fate of Tenerife falls on the two front men Nino and Alejandro Alfaro.  If they can combine to score half the goals they netted last year, Tenerife should be a favorite to stay in La Liga.

Will the recent financial stabilization free Valencia CF to focus only on football?  Valencia quickly came out of the gates with six wins out of their first seven matches and hovered around the top four throughout the first half of the season.  As news filtered from the club about its massive debt and financial crisis, a dip in form coincided and saw Valencia drop to eighth by Round 27.  The players were not being paid, and rumors started to spread about key Valencia players, such as David Villa and David Silva, being sold in the summer transfer window to balance its financial books.   After Valencia secured a loan that would help pay the players’ wages for the rest of the season, the team magically reawakened from their slumber, contending for the last Champions League spot until the final couple of games of the season.

Again, the economic issues surrounding Valencia surfaced in the summer when Vicente Soriano promised a new beginning for the club.  Having become majority owner of the club, Soriano teamed with the investment company Inversiones Dalport to clear the team’s debt; however, Dalport could not back up their claims, and Valencia was in deeper trouble.  Valencia eventually secured a loan from the Spanish bank Bancaja for €74 million and reinstalled Manuel Llorente as president of the club, ousting the grandstanding Soriano.

Back to the actual football on the pitch, Valencia kept most of the core of the team, with Raúl Albiol being the only significant player to leave.  David Silva will be much fitter after a frustrating last season due to chronic ankle problems, and the Three Brothers, Juan Mata on the right, Silva on the left, and David Villa in the middle, should terrorize opposing defenses with their speed and versatility.  With Albiol joining Real Madrid, Alexis and Maduro look to be the central defensive pair with Carlos Marchena in front of them as the defensive midfielder.  Emiliano Moretti returned to Serie A with Genoa, so Valencia picked up Jérémy Mathieu on a free transfer to replace Moretti at left back.  Valencia also delved into the transfer market with the signing of former Mallorca goalkeeper Miguel Angel Moyà.  Even if Cesar receives the starting position, it will only be for one year, and Moyà is for the future anyway.  If the Valencia boardroom sorts itself out and gives the team the backing it deserves, Los Che should be fighting for a Champions League spot this year. 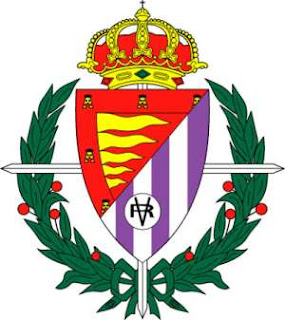 Was the eleven match winless streak to end the last campaign a sign of events to come in the upcoming season?  Ever since they returned to La Liga in the 2007/2008 season, they narrowly escaped relegation both seasons.  They cruised at mid-table throughout the majority of last season and then inexplicably fell off the map to avoid relegation by a single point.

Because of this alarming drop in form, Valladolid made many changes in the summer to whip a new, fresh attitude within the team.  Unfortunately, some of these modifications were due to economics.  Sergio Asenjo was their homegrown talent and future starlet, but Atlético Madrid offered €5.5 million, and Valladolid could not afford to let the deal fall through.  Pedro León, the creative force, leading assist man, and speedy winger on the right flank, transferred to Getafe for €4 million.  Henok Goitom, top goal scorer for Valladolid, went to Almería for €2.2 million.

Even though Valladolid now had a transfer kitty with which to work, they had to be judicious in their signings.  A €3 million purchase of Alberto Bueno from Real Madrid looks to be a solid signing, as he tries to prove to his youth team that he was worth keeping.  Bueno will likely play second striker to newly signed Manucho from Manchester United.  Manucho talks a big game, recently guaranteeing thirty to forty goals for Valladolid, but his paltry strike rate in Europe debunks his statement.  The most intriguing transfers for Valladolid are three young and promising players who have not delivered with their reputations as of yet: 22-year-old right back Antonio Barragán from Deportivo La Coruña, 25-year-old attacking midfielder Héctor Font from Osasuna, and 21-year-old central midfielder Pelé from FC Porto.

With the team currently constructed, Pucela is not as appalling as the team that did not win any of their last eleven matches, but they will likely be fighting relegation the entire year.  If they stay up this year, with another year’s experience for all of Valladolid’s young players, they will be a much more cohesive and threatening team in two years.

Can Ernesto Valverde build on the success that Manuel Pellegrini constructed at Villarreal?  Only a decade ago, Villarreal was a regional team toiling in the lower divisions of Spanish football.  When Pellegrini arrived from River Plate in 2004, Villarreal transformed from a lower table team to La Liga and Champions League threats.  Their accomplishments in the past five years led to higher expectations, and their fifth place finish was disappointing compared to previous seasons.

The back four for Villarreal became a little suspect throughout the year, especially in the central defense, where the opposition at times overmatched Diego Godín and Gonzalo Rodríguez.  They conceded fifty-four goals, only the eighth best defense in La Liga.  To compete with Godín and Gonzalo for the two starting center back positions, Villarreal bought Racing Santander product Iván Marcano for €6 million.  What also hurt Villarreal’s defense was the matches Marco Senna missed due to injury.  Hamstring problems forced him out of some matches, including the second leg of the Champions League quarterfinal against Arsenal when the tie was poised 1-1.  A rock in front of the back four, Senna’s ability and leadership are vital in Villarreal’s chances to reclaim a Champions League place.

Nihat Kahveci and Matías Fernández are the two most notables to leave the club, each garnering a €4.5 million transfer fee; however, they did not feature heavily last season, so their departures were inevitable.  Villarreal added pieces to an already strong squad, including the loan returns of Jonathan Pereira and Damián Escudero, 20-year-old Paraguayan midfielder Hernán Pérez for €2 million, and the most expensive transfer in Villarreal’s history, striker Nilmar from Brazilian club Internacional, for €11 million.  With Giuseppe Rossi and Joseba Llorente combining for twenty-seven goals last season, the addition of Nilmar will only strengthen an already fearsome attack.  Ernesto Valverde has the talent available to him, and if he commands the respect and discipline of the players, Villarreal will virtually guarantee themselves a Champions League spot.

Do Xerez have enough players to compete in their maiden season in La Liga?  Even before Xerez played a single match in La Liga, they were almost relegated back to Liga Adelante.  Real Betis petitioned to the LFP to investigate alleged improprieties concerning a capital increase in 2002.  The LFP ruled in favor of Xerez; therefore, Xerez finally had full playing privileges to play in La Liga.

The Xerez heads of state were also in a state of flux.  Former Xerez president Joaquín Bilbao resigned from the position in March due to his involvement in a drive-by shooting at a brothel.  Esteban Vigo, the manager who led Xerez to the Liga Adelante title and subsequent promotion into La Liga, left by mutual consent to manage another Segunda División side, Herculés.  José Ángel Ziganda now leads the team, hoping to inspire a team sure to be relegation favorites.

While Antoñito, Mario Bermejo, and Momo were the forwards who coalesced into a forty-three goal strike force, the performances of the players loaned to Los Xerecistas are the source of a stay in La Liga for another season.  Aythami from Deportivo La Coruña and David Prieto from Sevilla will be the stopgaps in central defense, Víctor Sánchez from Barcelona will provide cover in front of the back four, and Renan from Valencia will protect the defense in goal.  If any of these players goes down with an injury, Xerez will find it hard to provide cover.  As inspiring a story as Xerez is, it will likely end in relegation heartbreak.

Can Zaragoza somewhat erase the embarrassment of relegation and become the mid-table team that they always were?  After the 2006/2007 season, where they finished sixth and earned a UEFA Cup place, they suffered a shocking next season that saw them relegated on the final match day.  In the last forty-two years, Zaragoza was in the Segunda División for only four seasons, and each time Los Blanquillos were relegated, they achieved promotion in the following season.  Last season was no exception as they finished second in Liga Adelante.

Zaragoza only had one departure of any note from last year’s team, defensive midfielder Alberto Zapater who left for Genoa for €4.5 million.  Replacing him will be the physical Peter Luccin, who was on loan at Racing Santander last year.  Leading the attack is Liga Adelante’s second leading scorer Ewerthon, who scored an impressive twenty-eight goals in thirty-six appearances.  Supporting Ewerthon will be Javier Arizmendi and €5.5 million signing from Getafe, Ikechukwu Uche.  On the wings, Zaragoza was active in the transfer market, adding well-traveled Englishman Jermaine Pennant and former Bayer Leverkusen star Marko Babic.  In defense, Javier Paredes will compete with 21-year-old Serbian international Ivan Obradovic, who signed for Zaragoza from FK Partizan for an undisclosed fee.

With these new players and the guidance of manager Marcelino García, who led Recreativo Huelva to promotion and a subsequent eighth place finish the next season, Racing Santander to sixth place and a UEFA Cup position, and now Zaragoza to advancement in his first year, Zaragoza should be comfortable in mid-table.