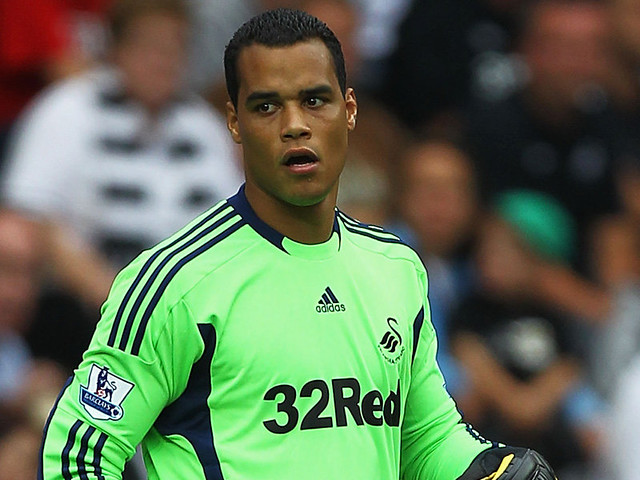 Goalkeeper Łukasz Fabiański joined Swansea City from Arsenal on a free transfer today. The Polish goalkeeper will add depth to a department of Swansea City that is already brimming with talent. Swansea manager Garry Monk shared his thoughts regarding the move:

“I hope we can help [Fabianski] progress as a player and in his career because at 29 he has got to the age where he wants a new challenge. Michel Vorm and Gerhard Tremmel will provide him with plenty of competition, but that’s exactly what I want.”

While the Swansea boss will be confident that the trio of goalkeepers will increase the competition for the number one shirt, the signing of Fabianski could hint that Swansea goalkeeper Michel Vorm may be on his way to Liverpool or another top club this summer, especially since Liverpool manager Brendan Rodgers is an admirer of his talent. Plus, with Vorm battling to get the starting spot on the Netherlands World Cup team, there’s a good chance his value may increase over the summer.

But while Vorm has the attributes of a decent goalkeeper, his performances over the course of the 2013/14 Premier League season were a disappointment compared to how well he did in the 2011/12 and 2012/13 seasons for the Swans. Vorm was out of action for parts of the 2013/14 season, but the Vorm of today is not the same goalkeeper who won so many plaudits during the 2011/12 and 2012/13 seasons. Those two seasons were filled with memories of Vorm making spectacular saves and being a difference maker for the Swans. During the 2013/14 season, he was average. There were several times where his positioning was called into question, but he was no longer that player that would keep Swansea in games.

Vorm’s performances over the course of the 2013/14 season were so average that Gerhard Tremmel was the better goalkeeper of the two and more solid in the back for the Swans. While not perfect either, Tremmel was a rock for the Swans in several matches where Swansea came under attack against opponents who were firing shots at the goal.

Overall, Tremmel exuded more confidence between the posts for the Swans than Vorm did last season.

Vorm has the capability to turn back time and put in performances like he did when he first began playing in the Premier League. But for Liverpool Football Club and its supporters, it should be a case of buyer beware if the side is seriously interested in signing Vorm for Swansea City.

For Swansea supporters, if Vorm does leave, Fabianski should provide excellent competition for Tremmel so the two of them can battle it out for the starting spot, which will give Swansea the confidence in knowing they have capable hands in the back next season and beyond.