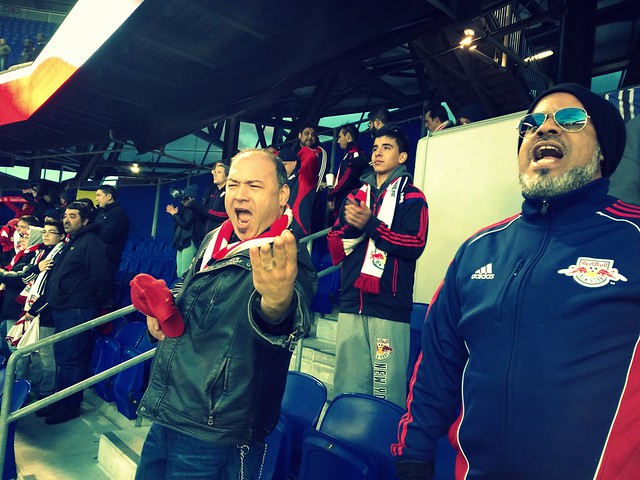 On Wednesday night I went to the New York Red Bulls game with a friend who was seeing the Red Bull Arena for the first time. He is German, which both is and isn’t a statement that is important to the story. It is, because he follows his hometown team and tries to cram in as many matches when he goes back to his family’s home there as well as games of his Bundesliga division favorite, Borussia Dortmund. He jokes that in Germany, the name of the coach of the German National Team is more well known than the name of the Chancellor. The game there is that important.

It isn’t important because he has been here long enough to set down soccer roots in this country, but hasn’t. Since moving the the United States in 1995, he has gone to three MetroStars games back when they were playing at Giants Stadium, which is less games here in almost twenty years than he went to during his last visit to Germany. He is a soccer fan, but hasn’t gone to a game here in the US for a decade and a half.

On Wednesday, the Red Bulls surprised the 15,000+ fans with a game that was truly lovely, at least from the midfield forward. While the Houston Dynamo threatened for the first ten minutes of the second half, they went scoreless. The game, statistics of possession and shots aside, felt firmly in the control of the Red Bulls, as the final scoreline of 4-0 showed. It was a game well played by the home team.

As he watched, one thing that struck him was the replay, not just of the goals but of refereeing decisions. His feelings were that it took away the mystery of a bad call and the passion that goes with uncertainty. Just because we can do something, a statement that becomes as big as the expanding MLS itself, doesn’t always mean we should. It sometimes gnaws at the roots of passion.

What was as interesting to me was that before the game started, as we watched the Red Bulls warm up on the field, I started naming and describing them, their backgrounds, their playing points good and bad, and the more I did, the more I found myself sounding like a fan of my own hometown team. Pride came out. I wasn’t trying to sell him on the idea of MLS. I wasn’t even trying to make him into a fan of the Red Bulls, as we talked about arenas and teams, about passion and pride.

The league can continue to expand and grow, but should it. If you believe the Reuter’s poll about fans in the United States following the World Cup, then we are realistically looking at a small fan base, both real and potential. Think of the fan base as pate or caviar. You can have the finest in the world, but if you spread it too thin, it loses its flavor and effectively it is subsumed by the bland bread or cracker that it was spread on. If the league cannot tap into people who are already soccer fans, then it needs to look at improving its current product and marketing it instead of trying to spread itself around, and there are ways to do that.

I doubt that many people remember Peter the Puck from when they were kids, but as the NHL expanded, they produced an animated series to teach people about hockey. Soccer may already be a part of the fabric of youth culture in the United States, but information is never wasted. And why is it that parents take their kids to practice on Saturday morning but not to a game on Saturday night? What we need is a game that is played well, a game that is not elitist, and an educated fan base that doesn’t feel like they are being cheated out of their money by a second class product.

Statistics, demographics, and game technology are all well and fine, and while soccer is a game you watch with your eyes, you should feel it with your heart. You should be passionate. It should be a song that plays in your head. It should be something you savor, a taste that rolls around in your mouth until you release it as words when you talk about your team and a game. That much is certain.