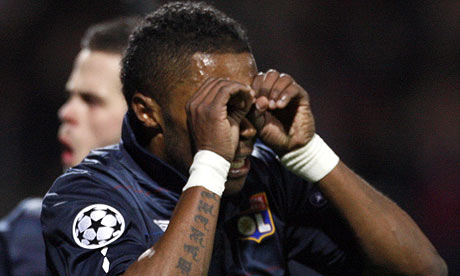 Michel Bastos Scored The Only Goal Against A Schalke Side Who Look Awful At The Back.

Claude Puel’s men hosted desperate Bundesliga side Schalke with three points and a positive Champions League start in sight. Unfortunately for Magath, another pointless start has been the order of the day after a hard fought match in France. After what has been an absolutely awful domestic start for Schalke, which has yielded zero points over three matches, the pressure must certainly be mounting on Magath. This result in France did nothing to help that.

Puel’s men have been on dodgy form during their first few Ligue 1 games, but looked to put all that behind them and did. Although, it must be said, if not for Hugo Lloris between the sticks for Lyon, Schalke may have left France with three points in the bag. Lloris did a fantastic job denying Jefferson Farfan early on, and Christoph Moritz from long-range.

Lyon made their possession count after just 20 minutes, when Mortiz’s awful header back to Manuel Neuer was intercepted by the lurky Michel Bastos, who took it past Neuer and put it in the back of the net. Lyon dominated the game but created little else in terms of clear goalscoring opportunities.

Schalke’s efforts took another knock after Benedikt Howedes was sent off for kicking Jimmy Briand in the midsection just before half-time. We’ve made the point time and again about Schalke’s defense, and once more it was the flop of the match. Moritz, Howedes, Plestan and Sarpei. That’s a backline fit for a club fighting for survival. Which, technically, is what Schalke are doing at the moment. Not a chance of coming out of this group unless something changes at the back for Magath’s side.