Atletico Madrid and Diego Simeone On The Verge Of Creating History 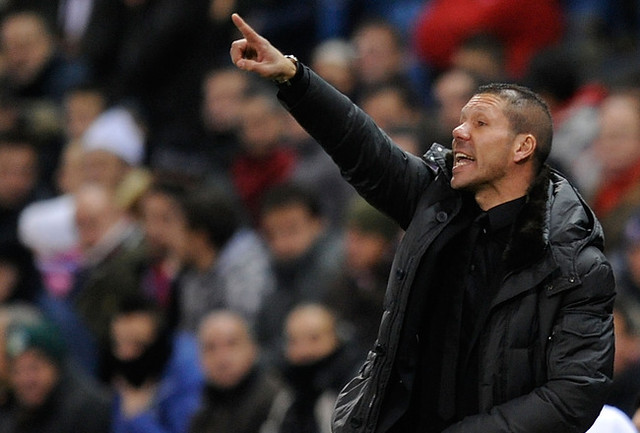 In April, Atletico Madrid’s fans in the famous Shed End at Stamford Bridge were electric as their manager, the former Argentina international and Atletico Madrid player, Diego Simeone, dared to dream. When Atletico Madrid’s players and staff jumped off the plane in London, they arrived thinking that only one team was going to dictate the play, and that team was the red and white half of Madrid.

The tactical genius of Diego Simeone has only had a spotlight shone upon it recently, after Atletico’s famous Copa Del Rey final win over their Galactico rivals last May. The team, then spearheaded by the prolific striker Colombian Radamel Falcao, beat their city rivals 1-2 at the Santiago Bernabéu without the world-class striker even putting his name on the score sheet. It proved just how far this team had come under Simeone.

When the Argentine became the successor of Gregorio Manzano, they were 10th in the domestic league, but finished the season 5th, and with a UEFA Europa League trophy, followed by the UEFA Supercup, won with a 4-1 win over the London-based team they defeated 3-1 at Stamford Bridge.

Following those achievements, Atletico went on to become Champions of Spain after their 1-1 draw against Barcelona in La Liga. Atleti won the league through its physical style, which is reminiscent of the way Simeone played during his career — rough on the outside but pretty on the inside with the results they earn. Teams know when they walk on the pitch that Atletico treat it more like a boxing match, never giving up, fighting to the last breath. This is why teams like Barcelona have struggled against Atletico Madrid, with key players such as Lionel Messi unable to find their stride as multiple players swarm to pressure and challenge him.

Formations deployed by the Argentine are usually in the form of 4-2-2-2 and 4-4-2, where players have excelled. The fullbacks are always up the field, and when not making lightning runs in behind the opposition defense, are always pressing the other team’s fullbacks into losing possession and forcing errors. The center back pairing of Godin and Miranda rarely put a foot wrong, acting as the foundation to the structure. The midfielders play with a fierce ferocity that few can match, one that intimidates the opposition’s players, with players like Gabi and Raul Garcia putting their all into every challenge. Playmakers such as Koke and Turan are always able to find space and deliver a killer pass, all for the prolific forwards in the shape of clinical Diego Costa and experienced David Villa to dispatch. On the bench, players like Adrian, Rodriguez and Tiago lie in wait. And when sent on by Simeone, those subs fit the style and tactics delivered to them by their leader, with all players believing in his philosophy.

Nobody would ever have predicted this at the start of the season, as the two biggest clubs on the planet – Real Madrid and Barcelona – both spent over 150 million euros on marquee signings such as Gareth Bale and Neymar Jr., while Atletico let go of their marquee player, the aforementioned Falcao. When the man that was the striker in the 2012 Fifa Team of the Year departed, Simeone was left with a major question mark in his attack. Who was he going to sign? At that time, Barcelona’s Spanish forward David Villa had talked up a move to another club, with most media outlets reporting that English giants Arsenal and their North London neighbors Tottenham wanted to acquire the signature of the prolific forward. This was when the cunning mind of Simeone struck, as he pick-pocketed the striker right beneath the English clubs noses, convincing the striker that Atletico Madrid was his best destination. This deal has turned to be a steal, having spent only £4.4 million.

Now with Atleti only one win away from the UEFA Champions League trophy, the love story of Diego Simeone and Atletico Madrid is likely to continue. We looked up the odds on online sportsbooks listed on TopBettingReviews.com for the Real Madrid against Atletico Madrid game, and Real Madrid seems to be the favorite. The odds for Atletico Madrid are +1/2 -115 over Real Madrid.