2010 Soccer Year In Review: The Highs and Lows

As yet another fantastic year of football comes to an end, I took a look at what made this year’s highlight reel.

Match Of The Year 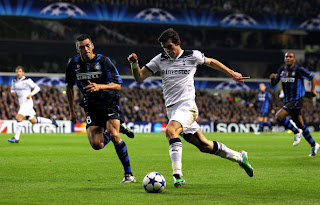 What a bloody match. As debutants of the world’s finest European competition, Spurs were paired with last years champions Inter Milan, FC Twente and Werder Bremen. They were not expected to progress from the group. But, as we have come to learn since September, Spurs can take on anyone on their day and they defied the odds to top their group, only losing once in the process.

This match was the return fixture of that fateful night at the San Siro, with the presence of a certain Mr Bale earning credibility for Spurs. Bale was again phenomenal in this match at White Hart Lane, setting up two and starring in a rather marvelous performance to beat Inter Milan.

Player Of The Year

I was forced to think long and hard about this one. On one hand we had the likes of Messi, Ronaldo, Xavi, etc. who perform superbly year in, year out. Then we have the players who have really come on as their own, and I decided to go with the latter, since the others have received huge amounts of praise over the years.

Malouda had not really established himself come 2009 and that was a big year for him. He proved to be a massive hit with the fans upon his arrival from Lyon. Last season he finished with a fine goal to assist ratio, netting 16 and assisting 14. Prior to January 2010 he had not been such a success, but hard work finally paid off when he helped Chelsea to a Premier League and FA Cup double, finally regaining what was rightfully theirs, following a tight campaign with arch rivals Manchester United.

Goal Of The Year

Irish football goes relatively unnoticed these days but one goal changed it all back in October. In a match between Glentoran and Portadown, the home side were continually pushing for an equaliser, and in the 92nd minute they scored what proved to be football’s goal of the year. The extent of the goal was exquisite. A cross was delivered for Matt Burrows and with his back to goal, he rather optimistically, attempted a back heel volley. Usually such an attempt would end up soaring high and wide but somehow he managed to perfect it and the video itself became a massive hit on YouTube, racking up more than 4 million hits.

Messi and Co. eat your hearts out:

Year Of The Pigeon

It inevitably summed up England’s world cup campaign. In the dire match that was England vs Algeria, a pigeon seemed to have perched itself on top of the Algerian goal, as it sensed there it would be no sense of danger throughout the 90 minutes. England lacked any real venom going forward and in truth never looked like scoring. When the final whistle went, Algeria celebrated like they had won the World Cup, holding on for a famous 0-0 draw against a country in decline. 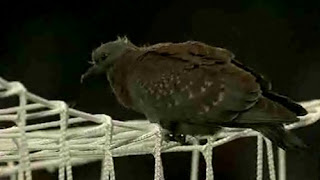 Virtually a last minute signing for Harry Redknapp, Van Der Vaart proved imperious from the off. He quickly established himself as a fan favourite with 6 goals in as many games. Unfortunately, injuries have hurt his goalscoring record, for the time being and he returned to action on fine form, grabbing a double against a weak Aston Villa side taking his tally to 8 goals and 4 assists for this seasons campaign. 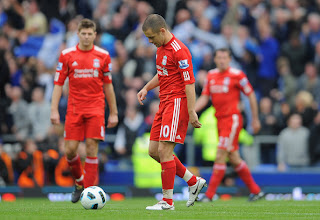 Cole’s career took a turn for the worst after Chelsea declined to extend his contract. He was snapped up by Liverpool, which was labelled as the “bargain buy” of the season but a red card against Arsenal on his Premier League debut for the Merseysiders didn’t do his confidence a whole lot of good. As a result, Cole lost his place in the team, and he has resorted to taking up a spot on the bench, not what he had intended upon arriving at Anfield.

Mike Ashley’s decision to sack Chris Hughton sparked outrage amongst the world of football after Hughton had guided the Magpies to a solid tenth in the league. Football fans worldwide were shocked as he was the one who guided Newcastle to Championship glory, directly after they had gone down. This was news to Hughton who recalled being called into chairman Daniel Levy’s office along with goalkeeping coach Paul Barron and was unexpectedly given the boot.

Ashley appointed Alan Pardrew as Hughton’s successor and has had a mixed spell since taking over, beating Liverpool but also losing to Tottenham and Manchester City. 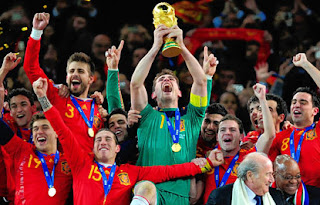 It was delight for Vincente Del Bosque and Spain as they won their first ever World Cup this past June. They also broke a few more records in the process, being the only side to win the World Cup after losing their first match. They also posted the record by winning the World Cup with the least amount of goals, only managing 8 goals, with hitman David Villa netting 5.

Iniesta became a hero in the eyes of the Spaniards after he sent the fans into jubilation following his 116th minute winner. It was ecstasy for Spain and agony for Holland as they also were competing for a first World Cup.

You can follow me on twitter or you can visit my blog as I give updates on what’s going on around the footballing world.