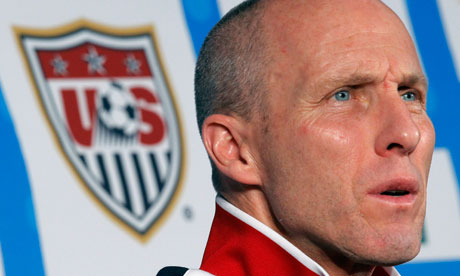 The Last Thing Bob Bradley Needs Is An Upset.

While many USMNT fans are feeling World Cup fever and looking forward to the possibility of a shock win over England, those same fans are looking at the other two teams in their group, Slovenia and Algeria, and seeing an easy six points. In 2006, the situation was quite similar. USMNT fans drooled over the possibility of beating a superior European team in the form of Italy, and overlooked World Cup first-timers Ghana and a smaller European nation in the form of the Czech Republic. The ‘Yanks’ were beaten 3-0 by the Czech Republic, 2-1 by Ghana, and managed a 1-1 draw against Italy, the team every USMNT fan was looking forward to seeing the national side play and upset.

Four years later, and England replaces Italy, Slovenia replaces the Czech Republic, and Algeria replaces Ghana. At first glance, it seems a lot easier this time around than it did four years ago, but that is the problem. When most fans see Algeria and Slovenia, they can’t think of a single player that plays for either of those teams, and so immediately discounts them. This is a massive mistake. Slovenia and Algeria both earned their places in this year’s World Cup by upsetting the odds and making it count in the big games. If the USMNT have any chance of upsetting the odds and beating England, the same odds apply for Algeria and Slovenia to send USA home early.

Slovenia’s World Cup qualification group included Slovakia, Poland, Czech Republic, Northern Ireland, and San Marino. Slovenia finished second in the group, just two points away from eventual winners Slovakia, and drew Russia in the play-off game for a World Cup spot. Slovenia beat Russia on away goals, and qualified for this summer’s tournament. Russia were heavy favourites to qualify, and boast a squad full of talent, which includes Arsenal’s Andrey Arshavin and Chelsea’s Yuri Zhirkov, amongst others. If Slovenia had the squad to deal with a Russia side who thumped the Netherlands in 2008 in the European Championships, then this Slovenia side is quite capable of causing an upset against the USMNT.

Algeria had the most intense pressure on their shoulders to secure qualification, when the news came out that they would fight for a place against rivals and 3-time in a row Africa champions. Algeria, who were also looked at as huge underdogs to qualify against an Egypt side who dominate Africa every two years at the African Nations Cup, beat Egypt and qualified for the tournament. Algeria, a side many know so little about, beat an Egypt side that has won 3 straight African titles and that beat Italy 1-0 in last year’s Confederations Cup. Algeria’s threat will come from out wide, with Portsmouth’s Nadir Belhadj and Wolfsburg’s Karim Ziani. Algeria also possess a wild-card in youngster Ryad Boudebouz, who is largely unknown in Europe still but could make a big splash at this summer’s tournament.

Why Beating England Might Not Be Good For Soccer In The US
World Cup Predictions, Knockout Stage: World Cup Buzz Podcast
Translate »