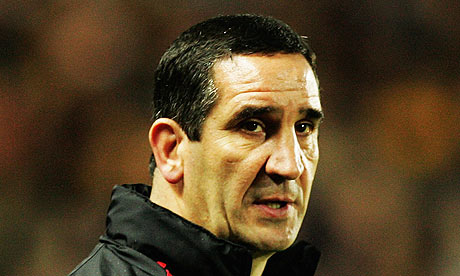 Ricky Sbragia has left his post as manager of Sunderland.

It has been announced after Sunderland’s home defeat to Chelsea, Ricky Sbragia has stepped down -despite avoiding relegation.

Sbragia initially took over at the Stadium Of Light in December as caretaker manager in the wake of Roy Keane’s departure. Following a 1-0 defeat to Manchester United, Sbragia went on to take seven points from the next three games – sticking four goals past West Brom and Hull respectively. After pressure from his players and fans alike Sbragia was appointed manager of Sunderland on an 18 month contract. Sunderland were promptly beaten 3-0 by Everton in his first game as manager.

Since his full time appointment, Sunderland have mustered a poor 14 points from 19 games – which is what led the club to fighting for their lives on the final day. I always felt that Sbragia was reluctant to take the job and appeared to have been pressured into it. During his caretaker spell he was always very coy about taking the job on full time and this was demonstrated in his post-match interiew after the victory at Hull. While providing his post-match reaction for British televeision one of his players is clearly heard shouting: ‘give him the job’ – the Scot not only looked embarrassed, he looked uneasy. However, that could merely be my interpretation of events.

Todays announcement following the match came as no real surprise to me, and one assumes that the board if not the players were fully aware this was to be the former defender’s last game at the helm. Rumours of a full-take over by American investor Ellis Short have been rife over the last 24 hours and that the Short wanted his own man in charge. With that in mind a thought creeps in that maybe Sbragia didn’t jump, he was pushed –  a day before his 53rd birthday.

The next seven days could big ones on Wierside as we await clarification as to how accurate the rumours of Short’s buyout of the club are. Once we have an idea of the shape of things at boardroom level at the club we might be able to profile the kind of man likley to take up reigns at the Stadium Of Light. That being said, there might be a new man in charge within the next few days anyhow.

Martin Jol and Steve Mclaren are already being linked to the Black Cats job but you would feel that Mclaren would be a somewhat unpopular choice. I have a strange feeling in my stomach (hopefully it isn’t something I have eaten!) that if the buyout rumours are true, even Niall Quinn may be a candidate for the job – particularly if Short wants someone he knows and trusts in charge.

As I update this post, Sbragia has since been quoted as saying the following:

“I spoke with chairman Niall Quinn this week and I think we need a bigger name to carry the club further. I’ve done everything I came to, I’ve kept the club in the Premier League. I would like to have done it better but I’m pleased we stayed up.”

The club have also released their own statement in the last hour, to read it please click here: http://www.safc.com/news/sunderland-afc-statement.html