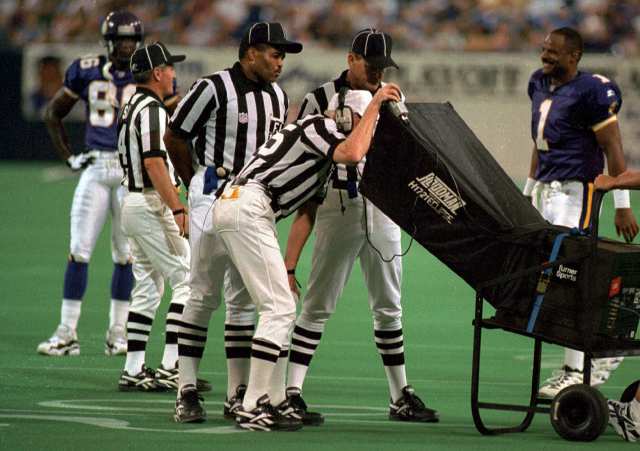 NFL officials go "under the curtain."

If you could name the most important topic for discussion that has concerned you and everyone else involving the game of soccer, a few different themes would come to the surface. Racism is obviously a hot button item, as is financial stability in various leagues and confederations. But arguably the most controversial issue which directly affects on-the-pitch results has been getting goal-line calls correct.

In today’s professional sports arenas and stadiums we see the use of replay review to ensure that the integrity of the outcome is preserved. We see it in the NFL in the end zone and several other types of plays where questions of possession or landing in and out of bounds are raised. On the ice in hockey, it’s used to make sure that the entire hockey puck is over the goal line. In baseball, they use the replay to make sure that home runs are clearly over the wall. And the last of the Big 4 American sports, basketball, utilizes replay to confirm proper scoring of 3-point field goals, and also to discern if a basket was scored before time has elapsed.

In MLB, the NHL, and the NBA, the common theme is ensuring that all points are awarded properly. But since the discussions of using replays in soccer has been ignored and/or shunned, many problems have continued to pop up, and nearly everyone has been looking towards FIFA to fix this problem. Amazingly FIFA has decided for a long time to stay with the status quo, leaving fans frustrated whenever a goal-line decision is botched.

How many times have you seen officials get goal-line situations completely wrong?

UEFA has attempted to rectify the situation without using technological means. If you watched the 2011-12 UEFA Champions League, you saw two extra on-field officials, one along each goal-line. The same concept has been employed for this recent Euro 2012 tournament. It has seen this idea from UEFA President Michel Platini already go horribly wrong during the final group stage match between England and Ukraine. A goal judge, Platini’s supposed savior who should have had a clear view of Ukraine’s equalizing goal, failed to observe the ball fully crossing the line.

Just recently in MLS New York Red Bulls defender Wilman Conde looked to have cleared a potential goal off the line from Chicago Fire forward Dominic Oduro. Yet replays showed the entire ball was a good foot past the goal-line, and Baldomero Toledo’s crew said no. The far side assistant was in a bad position and Toledo himself was unable to get a proper view.

Yet FIFA still says no to goal line technology – at least until recently. Unfortunately recently is too late for teams like Ukraine, who may have advanced had their goal counted.

I don’t believe implanting a computer chip into an official league or national team match ball is the correct solution. But my idea seems simple, and could make those hard decisions very easy.

Where the crossbar and the posts meet, drill a hole and insert a camera either in one or both corners on the inside. Run the wire down the inside of the posts and create another cylinder along the ground, long enough to protect it to transmit the signal. Give the fourth official a monitor at his table and allow him to watch replays from the broadcaster. If he sees a goal or not, then he will inform the head official through their headsets. If there is any question of how to account for the stoppages caused by replay, make an addition in the laws to add an automatic one minute of stoppage time for each instance of a review.

If this simple act can save the anger of players, coaches, clubs and National Teams when it comes to an important league match, US Open Cup, CONCACAF Champions League, World Cup Qualifying or the World Cup itself, then make the changes immediately.

The big sports in the world have made these changes and there were few sounds of protest. The technology is at the feet of FIFA, yet the old men at the house of football have made no attempt to change with the times. They have frustrated every one that loves the game, and hopefully they will go ahead with goal line technology or my idea that I have written in this article.

The tests are being made as we speak and thankfully FIFA has seen the light, but once again this situation has begun too little, too late. The damage has already been done as we saw in South Africa in the 2010 World Cup when England was denied a real goal to the Germans in the Round of 16.