Your must-knows about La Liga at the one-third mark

The first third of La Liga’s season has been a topsy-turvy ride, though you wouldn’t necessarily know if by looking at the top of the table. At the summit, Barcelona have continued their excellence despite the absence of Lionel Messi for large portions of the season. Of course, much of this is due to the play of Luis Suarez and Neymar, with the latter being far and away the best player in the league this season.

The two Madrid teams fill out the rest of the top three, but in a fairly surprising order. This summer Atletico Madrid and Diego Simeone indicated that it was the dawn of a new era for the club, one in which the signings of Luciano Vietto, Jackson Martinez and Ferreira Carrasco meant attacking soccer would define the club. Yet, it’s been more of the same for Atletico, only allowed six goals as we approach 2016.

The other Madrid club is a circus, as always. In hindsight ,the David de Gea fax machine faux pas was nothing more than the first domino in a season that would include an implosion in the biggest game of the season, a registration error that would see them kicked out of the King’s Cup, and a striker who’s in the midst of one of the strangest legal cases in years.

As for the rest, story lines abound. Let’s take a look at the La Liga season so far:

The Costa Rican has silenced doubters (and De Gea supporters) with his stellar play to start the season. Real Madrid held the best defensive record in Europe for much of the early season, something that could have solely been attributed to the performance of their shot stopper.

It was this performance against a high flying Celta Vigo that really put him on Europe’s radar however.

Navas was eventually beaten by a stunning Nolito strike late in the game. It was a goal that gave us one of the quotes of the season so far: “Any lower and Keylor saves that too, the prick.”

Speaking of Nolito, he’s been the star for a surprisingly good Celta Vigo team. They’ve gone off the boil a bit in the past few weeks, losing three of their last six matches, but they were the talk of the league in the campaign’s opening weeks, especially after their electric 4-1 victory over Barcelona.

Nolito has even weaseled his way into Vicente Del Bosque’s Spain squad, no easy task considering the coach’s propensity to stick with the players he knows. At 29, he is right at the peak of his powers, and he’s playing like it.

And when you’re even banging in goals like this …

… that’s when you know things are going your way.

In fact, it’s been the year of the striker around the league…

La Coruna: the prodigal son, Lucas Perez, has burst onto the scene leading the frontline by his lonesome for a resurgent Deportivo La Coruna. With 10 goals in 13 games the 27-year-old has almost single handedly helped the Galician side to an impressive 5th place so far. He’s an extremely likeable player as well, combining the silkiness and guile of a prime David Villa, with the work rate of Chicharito. It’s rare to see such a skilled player work so hard for the team, Perez is the gem of La Coruna.

Two other forwards, Athletic’s Aritz Aduriz (10 goals) and Real Sociedad’s Imanol Agirrexte (11) have been fantastic, as well. Both players are quite similar, reminiscent of the center forwards of old: good in the air; excellent with hold up play. Aduriz in particular is having an historic season at the age of 34. 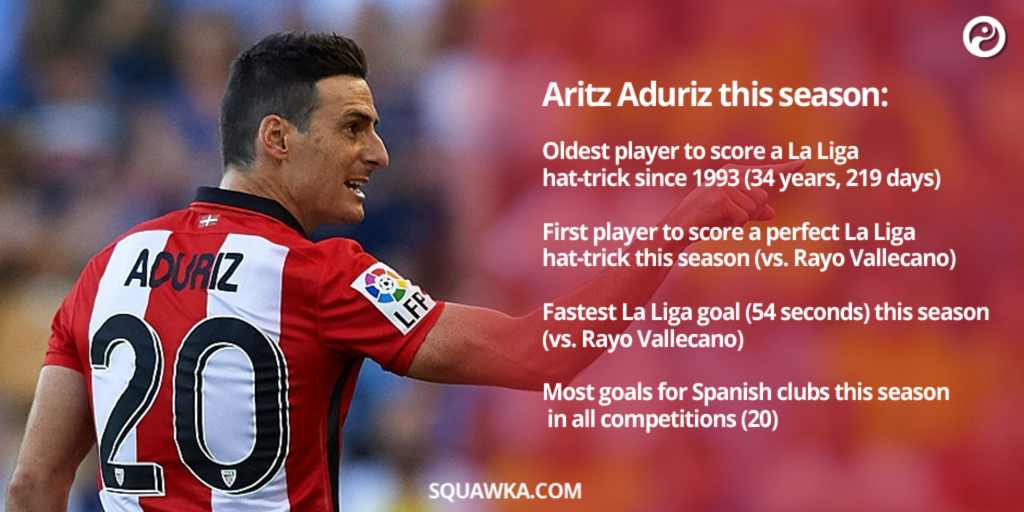 Still in Bilbao, another Basque star is born, but this one’s a bit different. Born in Bilbao to Ghanaian father and a Liberian mother, Inaki Williams doesn’t look like your typical Athletic player, but he certainly performs like one. Williams made his debut last season and he’s been in top form in recent weeks. He also seems to have a penchant for the spectacular.

…and this gem against Deportivo …

…but it was this goal that really put him on the map.

Of course, the real star of the season so far has been …

Neymar.
The Brazilian forward has clearly taken the next step up in his career and is widely recognized as perhaps the second best player in the world. He certainly been the best for the past few months. An alluring mix of skill, finishing, creativity and ultimately decisiveness has seen him become a match winner for Barcelona. His playmaking in particular has reached another level:

Inheriting from Ronaldinho and Messi, Neymar seems adequately prepared to be the next heir to the Barcelona throne.

Nuno and David. Both gone after woefully underwhelming starts to the season.

After an impressive debut last year, Valencia coach Nuno Espirito Santo was expected to take the team to new heights, but they were woefully inept in attack and Nuno eventually resigned after a series of poor results.

Brilliant timing really as he avoided the inevitability of the sack. The stats from his last game against Sevilla told the story. His team: no shots; no corners. Sevilla: 15 shots; five on target; 17 corners. Yikes

Moyes on the other hand wasn’t quite as brilliant with his timing as he was sacked before he could jump ship. His entire tenure at Real Sociedad felt like a novelty act.  Moyes often seemed way out of his depth, winning only 28.5% of his games during his time with the club, and the highlights of Moyes brief career in La Liga seem to be centered around moments off the pitch.

The biggest game of the season so far turned out to be an absolute battering. Barcelona walked into the Bernabeu with their tails up and turned the Madrid fortress into a Catalan playground.

4-0 – an absolute drubbing that was far worse than the scoreline suggested. With a recently returned Messi on the bench, Barcelona lay waste to their rivals, waltzing through the defense without a care in the world.

The pick of the bunch, this brilliant strike from Andres Iniesta (who was applauded off the field by the Madrid faithful) after some intricate build up play.

In the wake of the match, the inevitable “Benitez Out” claims started to reverberate around the capital city. Florentino Perez would defend his coach, but it was a monumental tactical failure. This snapshot of Madrid’s ineptitude would go viral in the aftermath.

With two-thirds of the season still to come, La Liga is sure to its typical entertainment, drama and theatrics. Stay tuned.