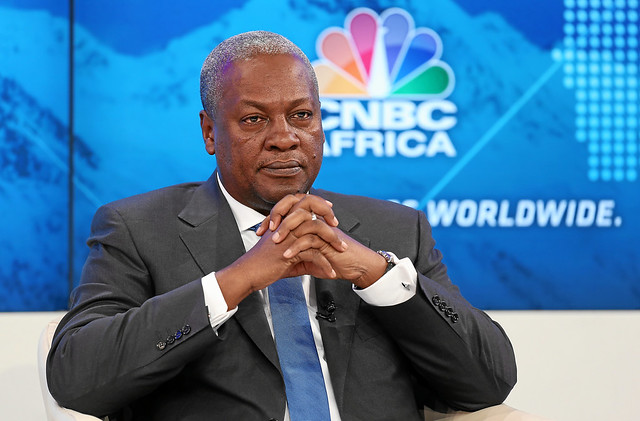 After reports leaked from the Black Stars training camp yesterday that Ghana’s players planned on forfeiting tomorrow’s pivotal match against Portugal due to not being paid for their performances yet, Ghana’s President John Dramani Mahama (pictured above) has intervened to make sure everything is under control.

“The players insisted that they will want physical cash,” Deputy Sports Minister Joseph Yammin said in comments broadcast by Accra-based Citi FM. “Government had to mobilize the money and a chartered flight to Brazil. The money is in excess of $3 million.”

“President Mahama waded into the matter after agitation from the Black Stars players over their appearance fees for the World Cup which has not been paid since the start of the competition. President Mahama personally spoke to the players to assure them that the money will be paid by Wednesday afternoon which has brought some assurance to the Black Stars,” said the Ghana FA in a press release.

One must wonder how must focus and preparation the players have put in this week with this on the minds of the team. Last week, reports where that the players planned on protesting against manager and former Black Star Kwesi Appiah. Ghana’s FA denied the reports and the players played a good game where they drew against World Cup favorites Germany 2-2. Now with this issue resolved, the squad has one day to remember what they’re in Brazil for and try to beat Portugal who have an outside shot of qualifying for the knockout stage.

Moments like this is when the elder statesmen of the team like Michael Essien, captain Asamoah Gyan and Sulley Muntari must remind their teammates to play hard for each other and try their best to succeed. Losing to the United States in their opening match put them in the predicament they’re in with having to depend on Die Mannschaft to defeat the USA while beating Portugal by a certain margin to advance. If the Black Stars can accomplish this, then they can put all issues behind them and focus on making another run like 2010 which can go further.