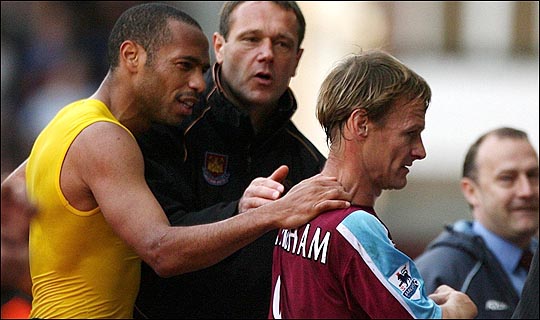 Second, the addition of Sheringham will provide Allardyce will help on the training pitch and on the field of play. The former England and Tottenham striker will be able to work one-on-one with West Ham United’s strikers to share his experience to help improve their efficiency in front of the net.

Sheringham, who is a childhood West Ham fan and played alongside Big Sam at Millwall as a youngster and has known the manager for more than 30 years, will be working with Carlton Cole, new signing Mauro Zarate and Andy Carroll. Regarding today’s announcement, Sheringham said:

“I’m very excited. Sam phoned me a week or so ago and asked me if I fancied it. It was far too good to resist really.

“Being a West Ham boy and coming from the area, it fits nicely in all that I’m about, what with working alongside Sam and knowing a few of the players as well. They’ve got a lot of respect for Sam, they speak very highly of him and to know that’s the case made me want to get involved.

“I know the environment, I know everything about West Ham, so it was just too good an opportunity to turn down.

“I’ve had a couple of offers since I’ve been out of the game, which didn’t feel quite right but, when this came along, it felt just right for me. I’m delighted to be coming back to the Club.”

The 48-year-old joins West Ham United on a part-time basis.