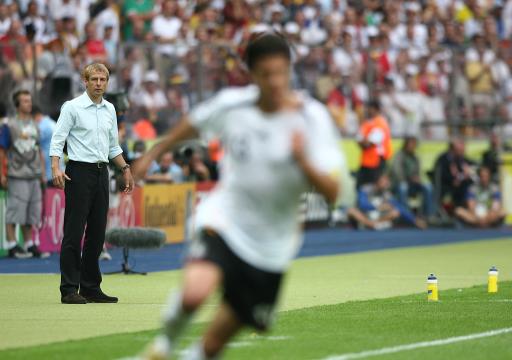 It’s not just Landon Donovan’s exclusion from the US 23-man squad for Brazil that should make people take notice. It’s far deeper than that. Jurgen Klinsmann is taking his formula from years gone by and updating it, just wearing different colors. In order to understand this US roster, we must first look back at Germany’s from 2006 because a close examination will make nothing released today seem surprising.

The turnover for both rosters was extensive, especially when considering the change from one World Cup to the next. The 2006 Germany squad had 10 returnees from ’02. The 2014 US squad has only 6 returning from ’10. It seems like unnecessary shock therapy, but first remember the context of the situations. After Germany’s cataclysmic performance at Euro 2000, changes were made across the system in order to improve young talent coming into the fold. Many of those early examples, like Bastian Schweinsteiger, Lukas Podolski and even Per Mertesacker were included in the squad at the expense of older players of Rudi Voller’s time because it was more than necessary to make those changes, despite the shock.

Fast forward 8 years, and the 6 players returning from 2010 are the core of this US team as they were the last one. And consider that 5 of them are likely starting against Ghana. And at the fewest, 4 will. There was still a holdover core from Voller’s 2002 squad that transferred over to 2006, and Klinsmann kept most of them intact and starting. Players like Metzelder, Frings, and Ballack all stayed in the main frame, despite all of the transition. Germany’s 2006 World Cup roster had an average of 32.2 caps, and this US roster has an average of 33.4, so the difference in numbers is miniscule while the trends emerging are numerous. But there is more to it than just numbers.

Rudi Voller played with a backline of 3 as was customary for German teams of days past. Klinsmann moved to a back 4, which was (and still is) a major tactical switch for most players, which is part of the reason why turnover was so great. Jurgen of 2014 isn’t dramatically switching systems like that, but he is trying to play with more of a high-pressing high-possession system as opposed to the soak up and counter methods of managers before him like Bruce Arena and Bob Bradley. Therefore, most of the players who fit the old systems had to be phased out for newer ones, which often means going younger and inexperienced. In 2006, players like Bastian Schweinsteiger would probably not have fit in to a 3-5-2, as opposed to Jurgen Klinsmann’s 4-2-3-1, for example. For a corollary, imagine Carlos Bocanegra of today playing the high-line high-press now in vogue. And if you’re having night terrors, you’re right because we’ve seen that go wrong already. The situations are not completely analogous, but the similarities are there in simple selections based on tactics and age. Then, we get to the controversial decisions, and it’s almost like listening to a recording with “translate” turned on.

Those of keen mind will remember the public battle for the #1 keeper spot between longtime holder and German captain Oliver Kahn and his competitor Jens Lehmann. The policy of constant rotation angered many, and created confusion as to who would eventually win. Eventually as we know Lehmann won, and while justified, it was still surprising to see that type of move played out before a home World Cup. Fast forward 8 years and not only do we see the phasing out of long-time captain Carlos Bocanegra in favor of going younger (and faster) at centerback, we also see the public disputes with the talismanic Landon Donovan. His Cambodian holiday didn’t win him many friends, and when he returned to the fold, he only really showed his true colors at the 2013 Gold Cup. Since then, he’s been somewhat invisible for the national team and also worryingly off-form for the LA Galaxy as well. Donovan not starting against Mexico in April should have been a clue, and the recent public comments were also indicative of something deeper goings on. Lehmann didn’t really put a foot wrong in 2006 aside from the opening game, and Germany’s failure in 2006 was no fault of his. Kahn did remain as a backup to Lehmann and of course Donovan was left out altogether, but the entirety of the two situations played out almost identically. It remains to be seen who replaces Donovan, but his absence will not be the reason why the US slips in Brazil.

And there’s one more story worth telling from ’06 that has frightening parallels to 2014.

There was a young player named David Odonkor who was making waves with Borussia Dortmund in the lead-up to the World Cup. He caught Klinsmann’s eye, and while he was expecting to play in the U-21 championships happening just before the tournament, Klinsmann told him to turn off his phone because he was going to play in the World Cup and he needed to hear nothing from anyone else, including his family after the first call. Odonkor ended up being an impact sub for Germany in many games, including the quarterfinals and semifinals. Now in 2014, there is another dual-national that will probably get the same run-out… Julian Green. While the backgrounds are completely different (and Green has still only played 4th division games), he is, as was Odonkor, the apple of Klinsi’s eye, and is seen to be an impact sub; bringing in fresh legs and fresh creativity from the wing when it may be needed towards the end of matches. Again while not completely analogous, the similarities are too many to simply ignore, especially when one could argue there was another player in DeAndre Yedlin that would have fit the same mold if not for Green. Hopefully for Green, and every US fans sake, Green’s career turns out far better than Odonkor’s did.

The upshot is this. The surprises may not be as surprising as first thought as Jurgen Klinsmann did the same thing in 2006 with his Germany squad. He risked alienating fans and players alike by turning aside the more experienced players of generations past in exchange for going younger and faster in a competition with a large amount of pressure in each case.

I’m not saying this US team will make the semifinals and draw the eventual champions into extra time (they’re still 4th favorites to make it out of their group). But Klinsmann saw an opportunity then and now to introduce a younger generation of player into the national team fold, and he did it then and now on the biggest stage possible.

While you may question his decisions, there certainly is a method to the madness, and that method is not too difficult to decode especially when played out twice. Ask any German fan.