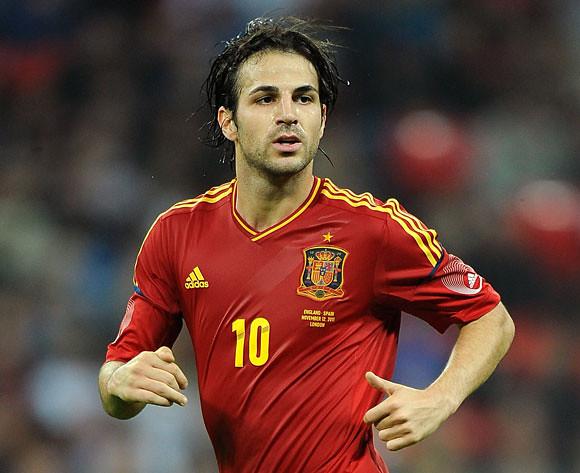 F.C. Barcelona has reportedly put a £45million price tag on Cesc Fabregas’ transfer fee. The Spanish club is looking to trade a few of their players if the right price comes in, trying to clean house and make room for new talent. Two clubs with reported interest in Fabregas are English clubs Manchester United and Arsenal.

The club named a new manager in Luis Enrique after a disappointing second place finish in La Liga last weekend. Barcelona is looking to let as many as six players leave the club, including Fabregas. Arsenal is reportedly interested in signing their former player. Fabregas left the Gunners in 2011 for Barcelona and could be a big asset to a struggling Arsenal offense. Similarly, United tried to sign Fabregas last summer but the Spaniard wanted to stay at Camp Nou.

Fabregas mostly plays as a central midfielder, but has also played winger and second striker on a few occasions. Signed by Arsenal in 2006 at the age of 16, he joined their Academy and became Arsenal’s youngest first team player in his debut against Rotherham United. Later he became Arsenal’s youngest player to score when he got a goal against Wolverhampton Wanderers. Fabregas began starting in League games in the 2005-2006 season and made his own unique mark on the team, signing a five-year deal, in 2006.

Barcelona signed Fabregas in 2011 for £35 million and scored his first goal in 2011 against FC Porto, which led to Barcelona winning the UEFA Super Cup. Later suffering a hamstring injury in October of 2011, he sat out most of the month of October. He scored a total of 32 goals and 37 assists during his time with Barcelona.

Fabregas was first selected for the Spanish national team during the 2006 World Cup where he became the youngest player in Spanish history to participate in the World Cup tournament. He was also selected for the 2010 World Cup but did not start in any matches, only coming in as a substitute.