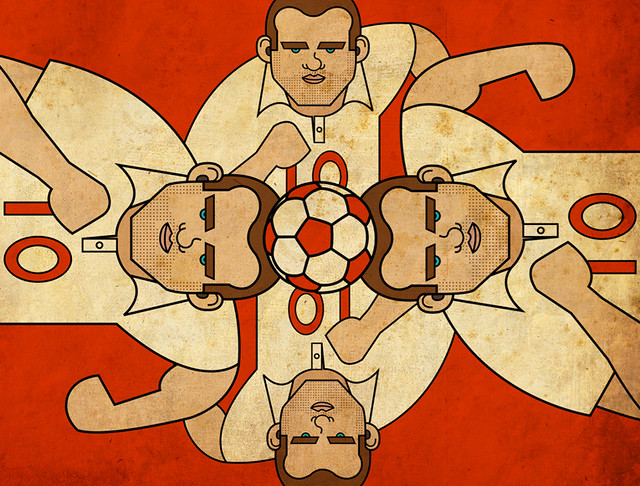 Manchester United striker Wayne Rooney tweeted yesterday that he is looking forward to working with Louis Van Gaal. And I sincerely believe that is true. Perhaps Rooney, Robin van Persie and Van Gaal can propel United to heights forgotten. However, I believe it is more likely that this will turn out to be Rooney’s last season at Manchester United and, honestly, it’s probably warranted.

Before you ask – I absolutely rate Wayne Rooney. I’ve seen him score some wonder-goals and perform at a world class level. He is a fierce, determined and passionate footballer and England’s best striker.

But, at Manchester United, is he indispensable? Even the most ardent Wayne Rooney supporter would admit that when fully fit, Robin Van Persie is a better player than Wayne Rooney; a fact that Sir Alex recognized when he signed the Dutchman in his final season in-charge at Old Trafford. So, simply based on footballing terms, and even before we mention Van Gaal, Wayne Rooney is not the central cog of the United machine.

Van Gaal has publicly declared his admiration for RVP and declared him captain of the Dutch national team. With Vidic, Rio and possibly Evra leaving, there is a dearth of leadership and senior dressing-room figures within the squad. Wayne Rooney certainly has a claim to the United armband – he has been at the club for a decade, amassed over 400 appearances and scored over 200 goals. He has also won multiple trophies, including a Champions League crown. He is also, undoubtedly, a team player who can motivate his teammates with his workrate and passion; the sort of player every English fan adores. However, Van Gaal recently stated that he believes that RVP has similar moral values and understanding of the game as the ex-Ajax coach. If there ever was an endorsement of a captain, that was it. Therefore, it is likely that RVP will be United’s next captain.

Where does this leave Wayne Rooney? Van Gaal is a shrewd manager, and he will undoubtedly attempt to make the RVP-Rooney partnership work. However, just like during Sir Alex’s last season, the system will be built around the strength of Van Persie playing as the most advanced striker. Add to that the additional complexity of finding an attacking role for Rooney in a team that involves Kagawa, Mata, Janujaz, Lingard, Powell, etc who can play the role behind RVP.  With Chicharito, Welbeck and the emerging Wilson, United is a team stacked in the two striker positions.

These complications will contribute to a possible loss in form for Rooney and that will catalyze off-the-field nonsense that will involve his agent Paul Stretford. Unlike Moyes, however, Van Gaal is not one to tolerate any player power. Van Gaal’s ego is too big to make any exceptions; something even Sir Alex did on occasion (with Ronaldo and with Rooney the first time around). Van Gaal’s managerial is riddled with high-profile bust-ups with players whose ability far exceeded Rooney’s (Rivaldo, Ribery and Luca Toni are great examples). In other words, Rooney’s eventual sulking will be the end of his United career.

It is possible that Rooney will be able to put his team before his own ego; certainly, he was a key part of the support cast that propelled United to UEFA Champions League success in the Ronaldo era. However, since then, Rooney has had a taste of being the main man, and it has proven to be an addiction for Wayne. It is also possible that Rooney reemerges as an important player if RVP has another injury-ridden season.

However, in the absence of those two scenarios, I expect Wayne Rooney and Paul Stretford to flirt with the likes of PSG and possibly even Chelsea. Certainly, given the friendship between Van Gaal and Mourinho, it is possible that a move to Stamford Bridge may happen in January in what could prove to be the most protracted transfer swap of all time (Juan Mata).

Wayne Rooney belongs in a category of footballer that includes Carlos Tevez and Luis Suarez; self-motivated footballers with an insatiable desire for victory. That independence also has a dark side – a narcissistic voice that tells him that he deserves to be Mr Manchester United. But, Manchester United is changing. And, Wayne Rooney may be the first of many high-profile casualties.

Nipun (@NipunChopra7) finds time for both neuroscience and the beautiful game. You can find his ULF podcast (@ULFPodcast) on iTunes, Stitcher or the Apple store. A Manchester United fan, Nipun has appeared on the World Soccer Talk podcast, Yahoo Sports Radio and NBC sports radio.