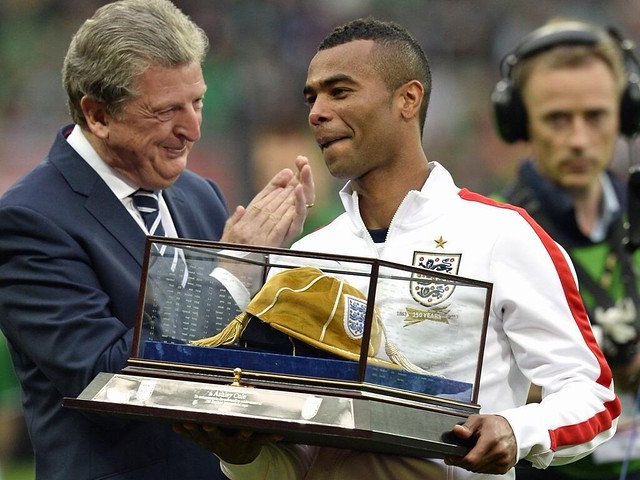 Chelsea left back Ashley Cole, long considered one of the best left backs in the world, has announced his retirement from the England national team.

Cole announced the news on his official Twitter account, stating that he received a phone call from England manager Roy Hodgson to break the news to him that he would not be included in the 23-man England squad for World Cup 2014 that will officially be revealed on Monday at 9am ET (which will be streamed live via World Soccer Talk).

The 33-year-old Chelsea defender earned 107 caps with England, an honor that made him the most-capped black player in England history, as well as the most-capped full back. Cole retires from England as the fifth most-capped England footballer of all time.

“I got the call from Roy and agree England team should be about the young players. I think it best I retire from England team now.

“We have a great manager and team and I wish them only success. I will be supporting them like a true fan. Thanks to everyone for everything.

“[Leighton] Baines and [Luke] Shaw are great players, proved this season, and are the future of this country, it was a pleasure to get 107 caps.

“Like me or not, trust me it’s hurt me to stop playing for my country, proud and honored.”

While Cole’s England career appears to be over, his club future is in doubt too where he may have played his last game for Chelsea Football Club.

“Among many difficult decisions I’ve had to make for my squad, not selecting Ashley was one of the hardest.

“He’s been an incredible competitor for England, to amass over a century of caps is a truly staggering achievement and he deserves enormous credit for the desire and brilliance which has shone through over the years he has represented his country.

“There are few players who can be considered among the very best in the world, but Ashley in his prime was the best left back without question.”

“The most important factor was speaking to Ashley prior to the announcement on Monday, he deserved to hear it directly from me and he took the news with huge grace.

“In two years working with him he has shown nothing but relentless professionalism, and a great hunger to play for England. He is someone I have the utmost respect for and I wished him all the best, he in turn wished the team well this summer.

“Of course I must respect his decision to retire, he has been one of England’s finest players, but I want to look to the future.

“It has been one of the hardest decisions of my career.”