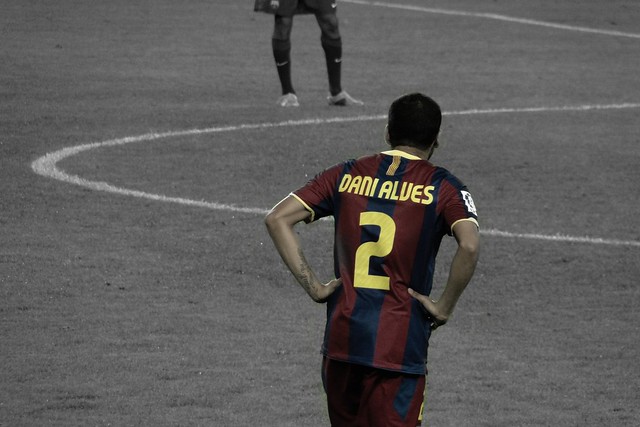 Barcelona’s long-serving right-back Dani Alves is reportedly on the verge of joining Paris Saint-Germain (PSG), with L’Equipe reporter Jerome Touboul claiming the Brazilian is ‘99.9% certain’ to join the French champions in the summer. This move could well be the catalyst for Arsenal’s Bacary Sagna, who is said to be set on leaving the Emirates, to complete a spectacular move to Camp Nou.

Sagna, who has been at Arsenal since 2007, has been seen as one of the best right backs in the world for some time, but looks set to ditch the Gunners this summer, with Arsene Wenger revealing yesterday that he is preparing for his compatriot’s exit:

“That (a contract extension for Sagna) is not close to being closed.

“I will have to accept it [if he leaves]. Only he can decide that now. If he goes we will accept it and respond.”

Sagna is reportedly unhappy with his current wage in North London, is no nearer to agreeing to a new deal, and is said to be hunted by both Manchester City and Chelsea. With his current contract up in the summer, the 31-year-old seems likely to leave on a free at the end of the season.

But considering the quality currently residing at both Chelsea and City, it would be some risk to be rid of a first-team place at Arsenal for what could well be the subs bench at one of their Premier League rivals.

While Sagna is an exceptional player, City’s Pablo Zabaleta and Chelsea’s Branislav Ivanovic are stalwarts of their respective clubs, and one of the first names on their teamsheets. For Sagna, the guarantee of a starting berth is absent in both cases.

Barcelona would surely be the perfect choice.

If it transpires, Dani Alves’ departure will be a sore pill to take for the Barca faithful, with the 31-year-old part of the furniture in Catalonia, consolidating his first team place over the past six years, and blossoming into arguably the most attacking full-back around.

While Sagna is no blunderbuss on the right, he is eager to join the throng, and has proved his aptitude in attack with consistently good crosses and an athleticism that sees him able to bomb tirelessly up and down the flanks.

Able to slot in at center back when needed, Sagna is arguably a better defender than Alves (who currently earns twice as much as the Frenchman), and while his attacking may not be as explosive as his Brazilian counterpart, he would be a sound signing for Barcelona.

With PSG set to complete a deal for Alves in the summer, the way seems clear for Sagna to up sticks and test his abilities in La Liga. For Barca, to fill an impending void at the back with a freebie international is a no-brainer, while Sagna should jump at the chance if the Spanish giants show interest, as there is will surely be no greater adventure now for the 31-year-old than one with the Blaugrana.