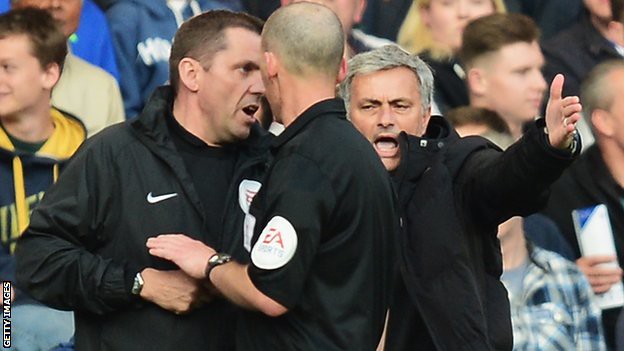 Chelsea manager Jose Mourinho has been fined £10,000 for comments made about referee Mike Dean and referees’ chief Mike Riley after Chelsea lost to Sunderland by a score of 2-1 on April 19.

Meanwhile, Mourinho’s assistant Rui Faria was recently given a 6-match stadium ban following his reaction to the referee’s calls during a previous Premier League match.

During the Sunderland post-game interview, Mourinho refused to answer questions and instead “congratulated” the referee on a good game in a heavily sarcastic tone, saying the performances of Dean and Riley were “fantastic” and “unbelievable.” The statement was short, only lasting a little over a minute. He also congratulated his own players as well as the Sunderland team.

The FA released the following statement:

“While the commission did not find that Mourinho’s post-match comments called into question the integrity of the referee appointed to the above fixture and/or the integrity of Mike Riley, general manager of the Professional Game Match Officials Limited, they did find that the comments brought the game into disrepute and the charge for improper conduct was found proven.”

While I personally believe that managers and coaches should feel free to say what they want within reason, I think Mourinho should remember he is the manager of a big club and his comments were immature and not meant for a post-game interview. This is not the first time his actions have been called into question and it’s most likely why the FA decided to deny his appeal of £8,000 for his behavior after the Aston Villa game. Any time an organization, manager or player is fined for poor behavior it should not be for just anything. I think £10,000 is a significant amount of money for making sarcastic comments about how a referee called a game, and unless it’s going to a charity or some other helpful organization, it is — in my opinion — a waste of a fine and punishment.

I think in this instance the fines are expected, as this isn’t the first time Mourinho’s actions have been called into question. However my stance on fines still stand, even on “repeat offenders.” Looking at the Donald Sterling controversy going on in the NBA where the NBA has promised to donate the fines levied on him due to racist comments he made to charities, I think The FA should be doing something similar with the fines Mourinho pays (by donating them to a charity or similar good cause) no matter how large or small the amount.