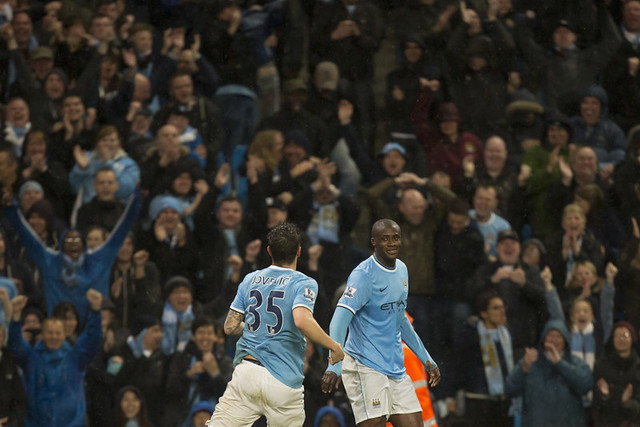 On a rain-soaked pitch, Manchester City found breaking down Aston Villa Wednesday evening very difficult. In the first half, the Blues were reluctant to shoot from distance, and the 4-2-3-1 formation Manuel Pellegrini set up created lots of pressure but only two dangerous goal scoring opportunities.

Manager Paul Lambert set his Aston Villa team up in a similar way to what we have seen several sides do away from home in the league this season. Villa conceded the wide areas to City but kept a good shape and defended in packs. All of this served to frustrate the Blues.

Manchester City’s three man attacking midfield line of James Milner, David Silva and Samir Nasri had lots of neat interplay. But, with the exception of Milner’s dangerous aerial cross that teed up Nasri in first half stoppage time, the attacking trio was stifled by Villa’s defense.

Pellegrini’s plan of attack was predictable. The club has used fewer players (23) than any other side in the league this season, including the three relegated squads. For all of City’s billions, depth is in short order and looking at the Blues bench today, nobody was present that could change a game tactically.

The City side has alternated between a 4-2-3-1 and a 4-2-2-2 formation this season, providing little tactical or player selection variety partially when compared to other top sides.

Pellegrini’s changes, particularly the insertion of Stevan Jovetić, helped lift City mentally but did not really change the game’s shape.

This all leads us to Sunday where Manchester City need a single point to lift the Barclays Premier League trophy for the second time in three years.

West Ham United manager Sam Allardyce is a master at playing pragmatic football. West Ham doesn’t simply hoof long balls forward the way many critics claim, but they will defend deep and use their wide midfielders as defenders five and six throughout much of the match. The Blues will likely be as hard pressed to break down the Hammers as they were Aston Villa today. However, West Ham provide less of a threat going forward and have often simply allowed an attacking malaise to set in when playing away from home this season. While Aston Villa posed a real counter-attacking threat to City, West Ham provide little offense impetus other than on set pieces and occasionally from wide areas.

This all having been said, with the exception of barren period in early February when Manchester City fired blanks in consecutive matches against Chelsea and Norwich, the Citizens have broken through even the stingiest defenses all season long. In the previous three meetings this season in all competitions, City have recorded 12 goals against West Ham. A thirteenth will likely be enough to secure the title.