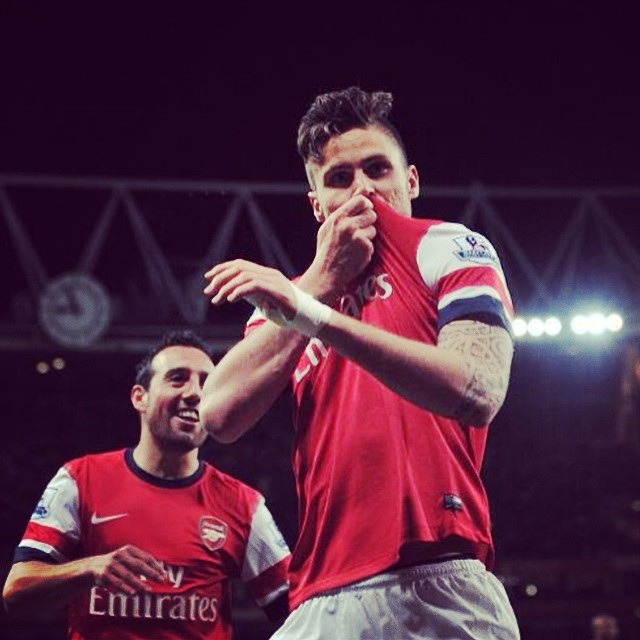 The curious case of Olivier Giroud is one which has intrigued followers of English football both on the inside and outside of Arsenal Football Club for the past two seasons. The Frenchman has scored twenty goals in all competitions this season and is the club’s leading goalscorer. However there is still great doubt as to whether or not he should be leading the line for the Gunners as we approach his third season with the club.

Since the turn of the millennium, Arsenal supporters have been lucky enough to see a number of great forwards appear for their club — the likes of Thierry Henry, Dennis Bergkamp, Sylvain Wiltord and most recently Robin van Persie. Olivier Giroud is not similar to any of those players in terms of natural goalscoring ability or style of play.

Giroud very much broke the mold for an Arsene Wenger centre-forward when he joined the club from Montpellier in the summer of 2012 with the Frenchman not being a quick frontman who could get in behind defenders nor was he an outstanding technician who could bring the ball under his spell on the edge of penalty area and play in a forward partner in the Henry or Wiltord mould. What Arsenal got with Giroud, for the first time since probably John Hartson was a target man. Not a physically domineering figure but a player with a good sense of control who could bring a ball under control following a lofted pass or get on the end of crosses.

For the early months of his Arsenal career there was a general perplexed feeling amongst both supporters and certain squad members with regards to Giroud. Supporters weren’t quite sure what the club had received with him, the only thing they were certain of was that he wasn’t of the same quality as van Persie and the early season ire with regards to the Dutchman’s sale to Manchester United did little to endear Giroud to the Arsenal supporters.

Squad wise Arsenal players had to readjust their own individual games to suit Giroud, gone was Robin van Persie, an individual whom they could give the ball too and he would usually make something happen and in his place was a forward who for the first few months needed chances created for him, hence why Santi Cazorla was such a success following his first appearance for the club. After Robin van Persie left the club in a cloud of controversy, who would have bet (on sites like 888sport) that Arsenal would be able to find a like-for-like replacement for RVP?

Giroud has improved dramatically since then with the Frenchman’s confidence comparatively sky high this season despite losing his place in the first team in recent weeks following fatigue and off-field events however there is still a general feeling that despite being the club’s top scorer he isn’t and never will be ‘the guy’ at the Emirates as Thierry Henry and Dennis Bergkamp were before him. This is perhaps an unfair assessment to make with it being clear that Giroud doesn’t possess the same natural ability as the aforementioned names but in his two seasons at Arsenal he hasn’t disappointed but neither has he been the required difference maker leading the line.

Let me expand on that point. There have been several occasions in the 2013-2014 campaign where Olivier Giroud has stood out for his performances. The prime example coming at the beginning of the campaign where supporters were once again on edge following a summer of relative inactivity in the transfer market only for Giroud to net a goal a game for Arsenal’s opening four Premier League fixtures including a very impressive finish at the near post in the first North London Derby of the campaign. Giroud continued to impress with his link-up play, another obvious improvement upon the 2012-2013 season.

Giroud had clearly worked on his ability to receive the ball with his back to goal and then look to play in either a runner from the flank or Aaron Ramsey bursting through the middle. It is no coincidence that Arsenal’s most impressive footballing moves this season have featured Olivier Giroud quite significantly.

For example Jack Wilshere’s side-footed finish capped a wondrous passing move against Norwich City earlier this season and it was Giroud who held the ball up and managed to flick it behind the Canaries’ defenders into the path of Wilshere. More recently Tomas Rosicky’s fantastic goal at the Emirates against Sunderland once again featured Giroud who flicked the ball back to Rosicky inside the penalty area with the outside of his boot. These individual moments of footballing brilliance from Giroud illustrate just how hard he has worked to change his game to suit Arsenal’s style of football, perhaps Arsene Wenger saw this in him all along and the former Montpellier frontman will continue to improve however at other times this season we have seen Giroud’s clear limitations.

I can pick out two instances this season where Giroud has shown why Arsenal supporters feel they need to sign a main striker to feature more than Giroud and it isn’t just for the reasons of squad depth.  In both matches against Chelsea in the Premier League this campaign Arsenal have not come away with the desired result, the clash at the Emirates just before Christmas was an uneventful 0-0 draw whilst the recent visit to Stamford Bridge ended in a 6-0 defeat. In both of those matches however Arsenal had the first real chance of note and both fell to Giroud.

At the Emirates there was around ten minutes left to play and Giroud received the ball in the penalty area one on one against Petr Cech, Giroud rushed a half volley and sent the ball wide of the near post. More recently at Stamford Bridge Arsenal actually began the game on the attack and with the score at 0-0 Giroud was played in behind both John Terry and Gary Cahill only to send a tame left footed strike into Petr Cech’s body when he really should have done better. Samuel Eto’o opened the scoring on the resulting counter-attack.

In fairness to Giroud both of these opportunities were half chances and were not to quote a golfing term a ‘gimme’ however you can’t help but think a Thierry Henry would have put both of them in the back of the net. If we take Henry’s wonderful goal against Real Madrid in the 2005-2006 that was a similar situation to Giroud’s chance at Stamford Bridge in that both players had to break into the box and hit the ball across goal however the difference being Henry had the quality to score.

Now you might be wondering where I am going with this, with it already being common knowledge that Giroud is not to the level of Thierry Henry. However bear with me. Had Olivier Giroud put both of those chances away it would have 1-0 in favor of Arsenal in both instances. Make no mistake this would have changed the outcome of the matches and Arsenal would have had a very real chance of winning on both occasions. Had that happened you are looking at a six point swing over Chelsea in favor of Arsene Wenger’s side which would put them on seventy three points in second place behind Liverpool rather than their current position in fourth place on sixty seven points.

Of course it is easy to look at the league table in that respect however nobody knows what would have happened in other matches had events turned out differently although it is worth making the point.

Olivier Giroud continues to show his worth for Arsenal with his most recent display of talent coming in last night’s victory over West Ham United. Giroud had increased the tension amongst the Arsenal fan base with his miss in the first half when one on one against Adrian however in fairness to the Frenchman the covering defender did enough to stop Giroud taking the shot on his instep. However what came in the second half was a moment of pure brilliance.

Thomas Vermaelen played a pass from just inside West Ham’s half directed into a crowded penalty area and Giroud somehow managed to evade his two markers, adjust his feet, bring the ball down completely stone dead before firing a half volley into the back of the net. I don’t think the majority of the Emirates crowd could believe what had happened initially but it is yet another sign of Giroud’s quality.

He brings something different to the table and it seems ironic that after all the years of pundits criticizing Arsene Wenger for refusing to add variations to his style, the time his takes the plunge for a different dynamic up front in the shape of Giroud there isn’t the attacking staple of years gone by which Giroud would have been perfect to assist.

You do get the feeling Arsenal will go after a first choice striker this summer. They have to with Nicklas Bendtner going to leave the club and Yaya Sanogo still just a bit of Premier League experience shy of making it in the first team, and if Arsene Wenger can bring in a centre forward of the highest calibre to take the goalscoring pressure off Olivier Giroud and allow the Frenchman to play where he is comfortable then we may well see a period of success for the Gunners where Giroud’s qualities will be appreciated for what they are.

@Chriswin4 on Twitter. A freelance football writer for hire. Indulges in all forms of the beautiful game from the Premier League to the Copa Libertadores. Always up for a discussion on football in general or something I have written myself.