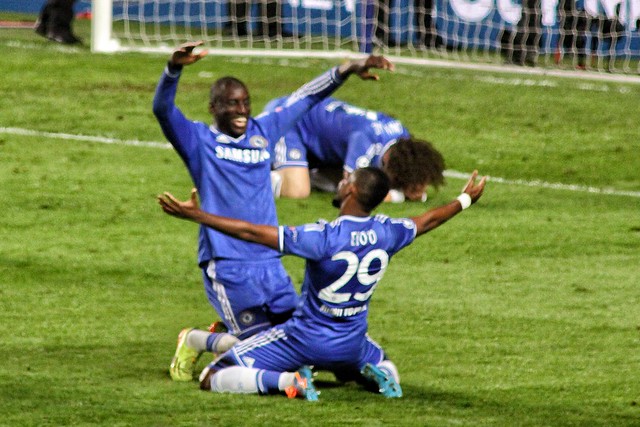 Jose Mourinho has spent a lot of time trying to keep up appearances in his press conferences. Throughout the season, he has put together these mind games in order to (according to most) deflect pressure from his team: Things like calling Arsene Wenger a specialist in failure, downplaying his team’s title hopes, and in general, discussing other teams.

But lately, his comments have related more directly to the players, giving us a bit of a glimpse into how certain players (or groups thereof) stand in relation to each other. Following their defeat to Crystal Palace, Mourinho stood up for his defenders (one of whom made the fatal mistake that day) saying that “other players” have made mistakes all year. His comments toward the Chelsea midfield have been almost universally positive, encouraging their creativity and expressiveness, even if he wants them to score more goals (he recently said he hopes for more goals from Willian next year).

But the strikers have been like the red-headed stepchild in the Chelsea camp. When Chelsea win, it’s because of the midfield and solid defense. When Chelsea draw or lose, it’s because they couldn’t score enough goals, and that’s the striker’s fault. Jose has made his feelings toward his strikers well-known: Samuel Eto’o is old, and Fernando Torres needs to score more.

But what about Demba Ba?

Out of everything that Jose says and does, his stance on Demba Ba is most confusing, given what he’s said about Ba and how rarely he has selected him. Arsenal have been linked with Demba Ba several times, but Mourinho seemed insistent upon keeping him. Several months ago, Jose said that he thought it was time for Ba to step up.

And yet time after time, game after game, Ba was passed over for Fernando Torres or Samuel Eto’o. As of today, here are the selection tallies for Chelsea’s strikers:

Over half of Eto’o and Torres’ appearances have been starts, while Demba Ba has started only 13% of his appearances. Fair play to Jose Mourinho if he views Ba as a “super sub,” but it seems ironic to criticize a group of players (the strike force) if only two of the three of them are playing on a regular basis, especially given the fact that Ba usually features for less than 30 minutes at a time.

If there’s any time to make a case for Demba Ba to play more at Chelsea, it’s now, following his last-gasp winner (in terms of the tie as a whole) against Paris Saint-Germain on Tuesday night. In the first leg of said tie, Andre Schurrle was chosen up front for Chelsea. When Jose was asked to explain the decision, he said, “when something isn’t working, you have to change it.” This seems an unfair criticism if only for the fact that Demba Ba hasn’t been much of a part of what’s “not working.” He hasn’t started a game since December, and usually made appearances in games in which either Chelsea were cruising (see: Newcastle [up 3-0,] Fulham [up 3-1,] Tottenham [up 2-0]) or found themselves in need of a goal (see: Crystal Palace [down 1-0,] West Ham [finished 0-0,] Aston Villa [0-0 when he came on, ended up losing 1-0,] and PSG [up 1-0, needing one to advance.])

Finally, in this last appearance, Demba Ba proved to be the Blues’ hero. When the pressure was on, he scored the goal (perhaps this had to do with the fact that Chelsea had three strikers on the pitch and were throwing everything at PSG.)

It is not a writer’s place to say what’s going through a player’s mind, but it does seem that Ba has played in games in which pressure has either mounted or subsided. There is no telling what Ba is capable of if he got to start the game free from these sorts of factors.

Perhaps Tuesday night’s heroics at Stamford Bridge have afforded him the chance to prove himself in Chelsea’s starting eleven.