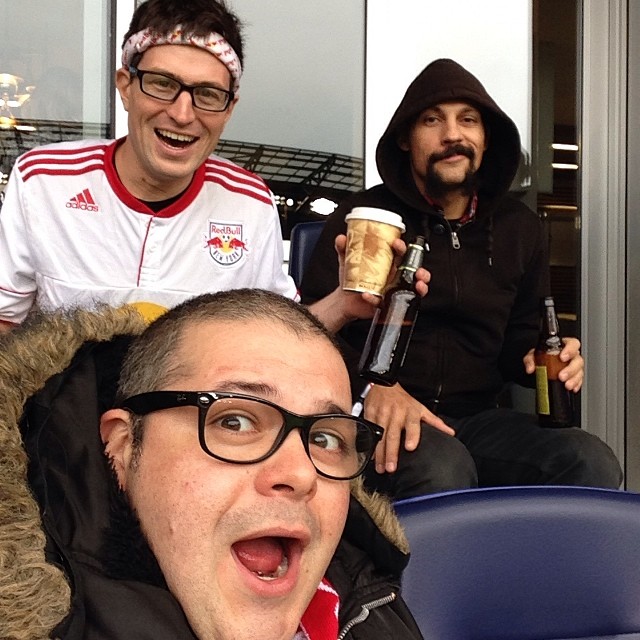 The rain that had been falling on the way over from the parking lot had stopped, so before the game the grounds crew turned on the sprinklers. The arena was thinly attended and the wet fans stared at the profusion of water. While it seemed like pointless overkill, it was just the beginning of a match where the words would take on new depth.

At first the game seemed high speed, conducted with an energy almost impossible to sustain. Peguy Luyindula, in his second start of the season, charged at the Chivas keeper, forcing him to quickly take a long kick. Then minutes later, Thierry Henry did the same, and you thought that this was their game, that all the talk on Friday had fired them into a frenzy. You saw the strategy. If Chivas think fast, force them to think faster. If they are organized, disrupt their flow. Attack, attack, attack. But for every strategy, there is a counter. Offside, offside, offside. Had the Red Bulls scored early on, it would have been very difficult for Chivas to take back the momentum in the arena. They didn’t.

There is little doubt that these two players are very dangerous as a scoring tandem. Rosales is leading Chivas in assists with three and Torres is the team’s scoring leader, now with four goals. You knew that they were going to have to be neutralized for the Red Bulls to win. What you didn’t expect is that they would have such an easy answer to all that unwanted attention. To draw fouls and further, to appear to embellish. The game soon lost its energy and became became bogged down in the middle of the pitch, using the field’s width rather than its length. When Torres put Chivas in the lead from a penalty kick, the attitude in the arena turned bitter.

The teams left the pitch at the end of the first half with Chivas 1-0 up. In the second half Chivas sought to defend that advantage, and played to keep the score static. They defended strongly from the start, but a more organized Red Bull team created several chances that found gaps in the Chivas lines. At times Dan Kennedy, the Chivas keeper, was forced into making very good saves, and at times the threat dissipated with imprecise shots. Chivas wanted to slow to game down, while the Red Bulls team recaptured the energy from the beginning of the game, and the crowd came back to them with a roar that drowned out the clap of thunder from the storm that rained down on the pitch. But the team was getting nowhere.

By the second flash of lightning, the second shock of thunder that rumbled through the arena, people stood up and simply left.

It was not a goal that set in motion a come-from-behind victory that would make the perfect ending for a team in search of its first win this season. Coming in the dying seconds of the added time, there was nowhere to go for the Red Bull team. There was no time left. The fact that the celebration of the equalizer that Peguy Luyindula headed past the Chivas keeper put you in mind of a win rather than a draw shows that the expectations for the team right now are not as high as they should be. To not lose is not the same as winning.

While neither side can claim the three points for a win, this draw is more than a simple 1-1 scoreline. There is a respect that one team has for another that is translated to the fans. Chivas, with what had come across as heavy embellishing in the first half, and what looked even more like outright diving in the second, lost respect. Even Thierry Henry cupped his hands and gestured with international sign for diving.

The Red Bulls fought back and secured a point, but the match pointed out something that needs to be examined. With Armando suspended last match and Jamison Olave known for aggressiveness, they will bear added scrutiny and regardless of their play and be baited by other teams looking for an advantage. Instead of respected, they will be targeted.

“It was much better in the second half overall; organization, our desire, our ability to create chances and get forward,” said Head Coach Mike Petke after the game. “But at this point, four games in, there’s still a lot we need to clean up. A lot.”