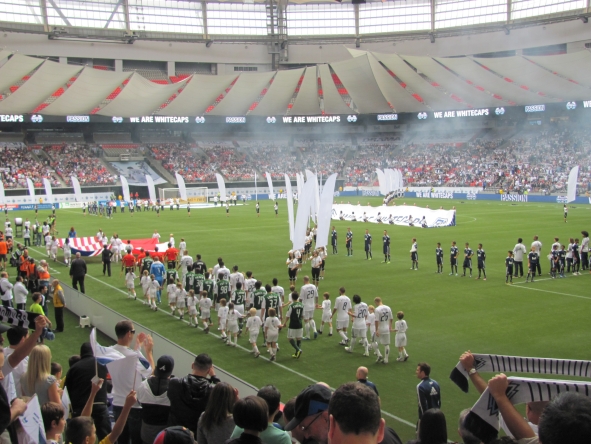 These letters can mean a number of different things. In mainstream American sports, Boston College immediately comes to mind, primarily as a college football mainstay. For the non-sport initiated, B.C. used to be a time annotation. It was meant to indicate the time Before Christ (before historians adjusted to the more secular Before Common Era), and was an inspiration for Johnny Hart’s prehistoric comic strip (itself an inspiration for a defunct PGA tournament held in Hart’s hometown of Endicott, NY).

But enough about us Americans for now. To Canadians, B.C. stands for British Columbia. Throughout the Americas, British Columbia has received headlines over the last couple of years. These headlines started and ended with a common denominator: B.C. Place.

A year and a half ago, B.C. Place was the centerpiece of the world’s attention as it hosted the Opening Ceremony for the 2010 Winter Olympics. Like the Games themselves, the Opening Ceremony wasn’t without glitch, as the torch-lighting portion was marred by a malfunction. As the Games opened, tragedy struck as a horrific, deadly accident occurred at the bottom of the world’s fastest luge course. Warm temperatures throughout the area hampered the skiing events at the Whistler resort. The Games were a success, including coveted Canadian victories in both Men’s and Women’s Ice Hockey.

But just over a year after celebrating these Gold Medal victories in Olympic ice hockey, the image of the city would take a turn for the worse. The NHL’s Vancouver Canucks posted the best record in the league and advanced to the Stanley Cup Finals. The dreams of the Cup riding through the streets of Vancouver would be dashed in gutwrenching fashion, as the Canucks folded after staking a 3-2 series lead. A Game 7 home loss to Boston ignited major rioting in the same streets where people envisioned a parade. This violence made its way to mainstream American news outlets, tarnishing the image of Vancouver to millions.

Interspersed between these two events was the preparations for – and launch of – the Whitecaps. As their inaugural season started, expectations were tempered for the expansion team. Success hasn’t been immediate for Vancouver. They opened their inaugural season by defeating their lone Canadian rival, Toronto, on March 19. Three months later (less one day), they would get Win #2. The drought between these victories saw the dismissal of Teitar Thordarson. Current coach Tom Soehn will make way for Martin Rennie after the current season. The Whitecaps have had bright spots; French Designated Player Eric Hassli has 10 goals, and the Brazilian Camilo has 9. The highlight of their season is certainly a 2-2 draw against Cascade rivals Seattle Sounders, capped by Hassli’s 85th minute goal that should be a favorite for MLS Goal of the Year.

All of this was a prelude to this past weekend, and the reintroduction of B.C. Place. Empire Field served as a temporary home to the Whitecaps while the refurbishments were completed. B.C. Place is not soccer-specific, it is shared with the Canadian Football League’s B.C. Lions. As with CenturyLink Field in Seattle they will only use the lower bowl for Whitecaps soccer in the foreseeable future. This brings the capacity for soccer to 22,000. One difference from the Sounders’ facility is that curtains have been installed to hide the upper bowl; early reports suggest that these curtains have yet to yield an aesthetic improvement.

Nevertheless the future looks bright. MLS Commissioner Don Garber has indicated that B.C. Place will be considered for high-profile events, such as the MLS Cup Final or an All-Star Game. Another possibility that comes to mind would be First Kick; if the Whitecaps show improvement on the pitch in 2012, B.C. Place could be an excellent site to host a marquee team to open the following season, especially if the upper bowl was opened to extend the capacity to 54,500.

The northwest triumvirate of teams have been excellent additions to the MLS table over the last 3 years. While Vancouver hasn’t found success with their match results to date, there is great promise moving forward. With solid attendance, a revamped facility, and two natural rivals, the Whitecaps will certainly entertain British Columbia – and the rest of us – for years to come, and B.C. Place should be an excellent fortress.

Jason Kreis And David Beckham Get Into A Scuffle
2011 US Open Cup Featuring Chicago vs Seattle: Promo Video
Translate »