A Tale Of Two Forwards 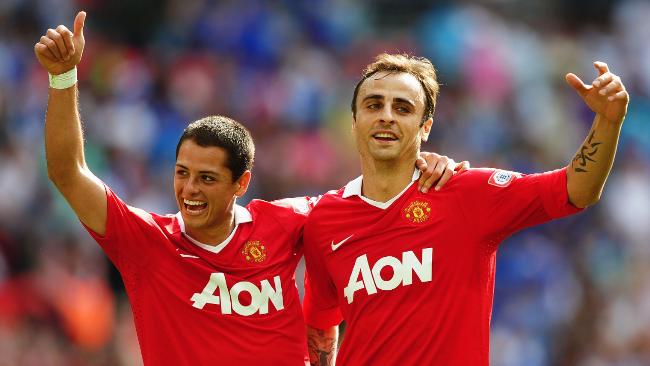 In much the same way you could say the same for Dimitar Berbatov and Javier Hernandez.

As a World Cup convert, I hadn’t heard much of Berbatov before the United tour of American during the summer of 2010. From what I remember, the talk was that the guy was brilliant, but hadn’t really panned out the way that fans had hoped. He played in the American Tour during the Summer of 2010, getting a penalty spot goal against Kansas City, but the talk of the team came as Chicharito took the stage in the waning moments of the MLS All Star Game. The former Chivas striker notched a goal, and set in motion a strange series of events that would occur for the Red Devils.

Upon return to the British Isles, United took part in the annual Community Shield, a 3-1 handling of reigning champion Chelsea. Both Hernandez and Berbatov sat to start, both came in at the half, and both scored goals. Recall that this was also in a period where Wayne Rooney was mired in a slump that had started at the end of the previous season and spilled over into England’s World Cup run.

With Chicharito being an unknown quantity, especially in a physical Barclay’s Premier League, Berbatov got the obvious nod to pair with Rooney to start the season. The Bulgarian couldn’t have started more quickly, notching 6 goals in 5 games, including all three goals in a victory against archrival Liverpool. Berbatov Fever had hit Old Trafford, and he looked unstoppable.

It was then that the Champions League started, and things got hairy. Rooney continued his funk. Chicharito got the start in a goalless draw against Glasgow Rangers, but he began to show his true colors in United’s 1-o victory against Valencia. The Mexican entered the match in the final 15 minutes, and scored the decisive goal to gain United a key three points away from Old Trafford.

After that Liverpool match in September, Berbatov went silent on the scoring front. It was this two-month stretch that began to cause heads to be scratched. It wasn’t until the end of November before he found the net again, and when he did, he put in 5 in a 7-1 dismantling of Blackburn. The theme had been set, though, and transfer rumours will resurface.

The story of Berbatov’s season was to be output in sporadic bunches. He has enjoyed a total of three hat tricks this season, yet now he finds himself on the bench. Wayne Rooney was always going to find his form, it was only a matter of time until he banished the skeletons from his mind and regained his confidence. The problem for Berbatov was that Rooney had shown a knack earlier in the season to play the part of deep-lying playmaker. Even when Rooney wasn’t scoring, he was dropping back and doing the little things to help his team. Berbatov, while very much a creator, stagnates when the team is out of possession. What United needed was not another deep-lying forward, but rather a plain old goal poacher. While you would think that the 21-goal Berbatov could fill that role, he lacked the drive or consistency that Sir Alex Ferguson needed in that role.

Enter Hernandez. As the winter progressed, Chicharito kept scoring. And he didn’t just amass meaningless goals in already-decided matches. His instincts have shown to be nearly perfect in finding the right holes in the defense to be available for crosses that he simply buries. He rarely misses, but has lately had poor luck in having sitters stopped audaciously by Tim Krul and Tim Howard. What the Mexican has shown is not only a nose for the net, but also a hunger and desire. You see it when he backmarks the opposing center-halves, chasing them around doggedly. It’s an attitude that Berbatov rarely shows on the pitch.

So it is the end of April, and Dimitar Berbatov sits on 21 Premier League goals, yet reports say he will sit at home while United play their first leg against Schalke ’04. In the Everton match over the weekend, Michael Owen was used as a substitute instead of Berbatov. Whether there was a tactical preference on Ferguson’s mind, I am not sure. But as Chicharito’s stock has risen, Berbatov’s has descended. It will be interesting to see how Sir Alex handles his forward ranks this summer.

-EDIT – It’s been reported that Berbatov is suffering from a groin injury, thus his exclusion from the lineup this weekend as well as the trip to Germany.

The History of European Soccer Teams Touring North America
Why Do Arsenal Fans Take Pride in the Financial Solvency of their Club?
Translate »