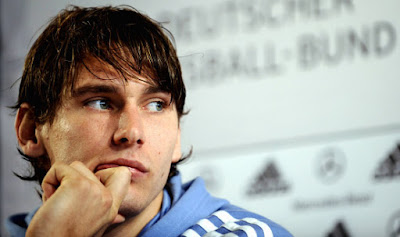 Is He Sure He's German? Helmes Misses Twice From The Spot.

What a round! Mainz, Borussia Dortmund, Hamburg and Bayer Leverkusen have all been knocked out of the DFB Pokal tonight after some shocking results. Germany’s lower league sides certainly have shown that they can battle the best of them, but Bundesliga supporters will be dismayed by the night’s events. Let’s take a look at a few matches and the repercussions of the results.

I didn’t see this one coming at all! Earlier in the season, Frankfurt lost at home to Hamburg by a score of 1-3, and I thought that with Hamburg playing well in the league, that they would be able to advance to the next round after winning this match against an opponent they’ve already beaten this season. Well, if ever there were a more opposite outcome, this was it. Both sides played strong, first-choice lineups, and that’s what’s most shocking and worrying about this result. Do Hamburg have a real problem between the sticks? Because in defense they don’t look shabby at all. I’d have to say that Heiko Westermann and Joris Mathijsen have looked an excellent pairing so far this season, and Marcell Jansen and Guy Demel on either side of them are not bad at all either. Within twenty minutes, Frankfurt were two-nil up thanks to goals from Caio and Theofanis Gekas, but Mladen Petric put his side back into it on 23 minutes. Gekas and an Mladen Petric own goal made it 4-1 on 64 minutes, but two minutes later Petric made up for his mistake and put Hamburg back in with a shout. Three minutes before time, Halil Altintop sealed the win from the penalty spot. I feel like Hamburg were dominated in midfield, and that’s what led to this really crushing defeat. Only having Tomas Rincon in there to hold the midfield is a big problem against Schwegler and Kohler who were battling for possession all night.

Another shocker. Gladbach are by far the worst team defensively in the league, yet they held on against a Leverkusen side who have some top quality goalscorers in their side. Unfortunately, one of those goalscorers showed himself to be in some serious need of a reversal in form after missing two penalties in one game. Two penalties? One game? He might as well be denounced as a German. Patrick Helmes, what on earth has gotten into you? Helmes missed just after the hour mark, a goal that would have won the game in normal time for his side, and the match entered extra time. Eren Derdiyok drew first blood for Leverkusen, but Idrissou equalized two minutes later to tie it up and force penalties. Everyone scored their spot-kick except Patrick Helmes, whose shot was saved by Christoph Heimeroth. Helmes is going to be really short of confidence for quite a while after this one.

It’s the end of the world as we know it! This one I just can’t understand. A goal-less draw forced penalties, and Lucas Barrios and Robert Lewandowski were denied by Kickers goalkeeper Wulnikowski, who won the match for his side. Dortmund could have won this competition, but now they’ve been knocked out by completely inferior opponents. Jurgen Klopp will have insomnia for weeks.