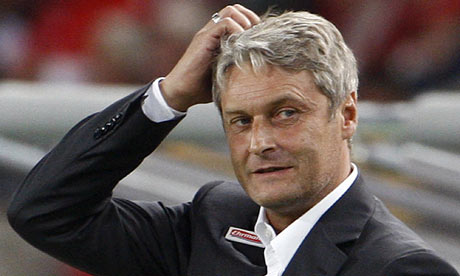 Armin Veh Will Have The Task Of Knocking Mainz Off Their Perch THis Weekend.

After what was another really boring international break, I’m sure everyone’s just really looking forward to a Saturday devoted to club football. So, for this week, I’m going to skip the dramatic build-up and just get straight into it!

Werder Bremen have recently had a well-publicized dressing room rift that only serve to further throw Thomas Schaaf’s plans of a title challenge out the window. Fortunately, the international break has allowed for a period of rest and recuperation for what was a heavily depleted Werder Bremen side the last time we got a look at them in the Bundesliga. To Thomas Schaaf’s delight, Torsten Frings, Tim Borowski and Clemens Fritz have all returned to fitness. Doubts still remain over Pizarro and Daniel Jensen, though.

Meanwhile, Freiburg have started the season exceptionally well with twelve points from their first seven matches, and this coming from a side who were expected at the start of the season to be fighting a relegation battle all year long. Papiss Demba Cisse will be looking to continue his red-hot goalscoring form with another one or two against Werder, and there’s no doubting him in the penalty area. Freiburg will definitely create chances, but it’ll be Cisse who puts them away. I’ll stick my neck out and say 3-2.

The pressure continues to grow on Bayern Munich after what has been their worst start to a domestic campaign in their history. Louis van Gaal, though, has received the full backing of the board, who have in turn placed full responsibility for this lack of form on the players. Even Franz Beckenbauer, who to be honest is never short of an opinion, stated that he doubts Bayern Munich have any chance now of retaining their Bundesliga crown. Bayern Munich will be without a full eleven players for this match, and that squad fragility to undoubtedly be the death of them.

Hannover 96 will definitely fancy their chances against what is an obviously depleted Bayern Munich squad, and they’ll know the pressure is not at all on them to perform here. All eyes will be on Bayern, and all eyes will roll at the end of ninety minutes when Bayern Munich once again fail to muster up an effective performance against what should be considered weaker opposition. Hannover have been performing above all expectations so far this season and currently occupy third place in the Bundesliga table. One side on very poor form, and one side on a fantastic run. It seems obvious to me who’s going to come away from Bavaria with three points! 1-2.

Armin Veh: the ultimate party pooper. That is, if Hamburg upset the applecart and beat Mainz this weekend. Mainz are currently on course to break the record for the best start in Bundesliga history if they notch up what will be their eigth win in succession, but Hamburg will be doing everything they can to prevent that. It’s more of a, ‘your goals interefere with my goals,’ type of situation. It’s kind of like a, ‘your fun is interfering with my fun,’ type of deal. You get the point! Mainz wonderboys Andre Schuerrle and Lewis Holtby will be the two to watch for Mainz, and they’ll likely take their opponents apart like they’ve been doing to absolutely everyone else this season. Unfortunately for Mainz, Schuerrle has already agreed terms for a move to Leverkusen, and Holtby will be expected back at Schalke at the end of the season. Enjoy it while it lasts!

Hamburg have lacked creativity going forward, and that’s nearly the only area of their game that needs improvement right now. All over the pitch, they’re very well balanced. Heiko Westermann in defense, Ze Roberto, Eljero Elia and Marcell Jansen in midfield, and Ruud van Nistelrooy in attack makes for a very strong core to this Hamburg side. But, it’s all about creating chances and finishing them off. I just don’t see them breaking down a very disciplined Mainz defense, and I also don’t see them being able to outscore their nearly record-breaking opponents. 3-1.

It’s a relegation six-pointer! Schalke have managed just four points from their first seven Bundesliga fixtures this season after nearly winning the title last year. At least they’re not Stuttgart! Der VfB have just recently sacked Christian Gross, and will definitely be hoping for a bit of a new manager bounce to take them through this difficult away game. Neither side can really defend, so I do expect to see some goals. That’s one upside? I think if Schalke lose, Felix Magath could really be the next manager to be out of a job in the Bundesliga. It’s so hard to seperate them, because they’ve both been so bad. 3-3. It’s last versus second-last. Who would ever have though those two teams would be Schalke and Stuttgart?

Promoted side St. Pauli take on a very defensive, but very poor, Nurnberg side and the kult club should really be looking at three points. St. Pauli have been making no miracles this season, but they are firmly rooted in mid-table. Safety first is definitely what will be preferred by fans to a buccaneering style of play or a 4-6-0 just to avoid defeat. Steady as she goes, and survival will come. But, you do have to beat the teams around you if you want an edge in the relegation battle. So, all of a sudden, this game becomes a lot more important for St. Pauli, and for Nurnberg too. I do see a home win though, just because I think there’s a little bit more quality to St. Pauli than there is to Nurnberg. 1-0.

Steve McClaren has spoken to the press about tomorrow’s opposition, and has described them as genuine title contenders. A bit of the old mind games, eh Steve? A little bit of the old Sir Alex Ferguson in him after all! Wolfsburg are also boosted with the return of Josue to their midfield, but will need to make due without number one goalkeeper Diego Benaglio. In his stead, youngster Marwin Hitz will get the nod. Otherwise, Wolfsburg are fully fit. This could be one of the great games of the weekend. Both sides play a good, attractive brand of football, and both sides are packed full of talent. Bayer Leverkusen will unfortunately still have to make due without Michael Ballack, but they’ve found ample replacement in the form of Hanno Balitsch. Should be a great match, and one I think Wolfsburg will come away from with a win. 2-1.