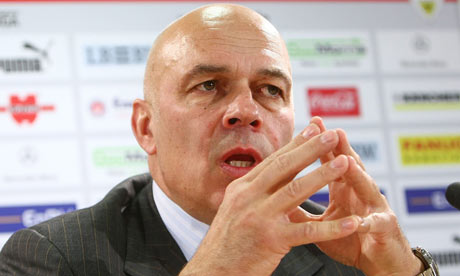 Could They Go Down?

Stuttgart are currently bottom of the league with a meagre three points from their first seven Bundesliga matches. Manager Christian Gross is definitely under fire, and I’m a bit shocked that he hasn’t already been sacked. Stuttgart finished in sixth place in the Bundesliga last season, and the year before that they finished in third place. Now, while it’s still early days, they look set for a relegation battle.

How did it all happen? Where did they go so wrong? I think it’s a combination of things. First, though, we’ve got to compare the squad they had last season, when they finished in sixth, with the one they have now. Stuttgart had a squad full of talent, and had a great mix of experience and youth.

Not a bad looking side at all. Khalid Boulahrouz, Martin Lanig, Sebastian Rudy and Mexican defender Ricardo Osorio were all on the roster as well. During the summer transfer window just before the start of this new season, though, Stuttgart lost a wealth of their talent. Jens Lehmann retired, Sami Khedira moved to Real Madrid, Roberto Hilbert moved to Besiktas, Ricardo Osorio went to Monterrey, Martin Lanig moved to Koln, Sebastian Rudy joined Hoffenheim and Aliaksandr Hleb’s loan deal expired.

That’s a huge amount of players to lose over the summer. What’s especially devastating is that many of those players were key to Stuttgart’s success in recent years. Lehmann, Khedira,  Hilbert, and Hleb were all regular first-team players. That’s four of their starting eleven that they lost over just the summer. It was up to the Stuttgart backroom staff and manager Christian Gross to effectively replace those players. Unfortunately, they didn’t. Stuttgart signed Johan Audel to replace Aliaksandr Hleb, they signed Christian Gentner to replace Roberto Hilbert, and they signed Mauro Camoranesi to replace Hleb. Well, let’s look at it like this. Audel isn’t a good player. His previous professional experience has been with bottom-half French sides, and he’s barely made 100 league appearances in his entire career. Christian Gentner failed to make it at Wolfsburg ahead of players like Karim Ziani and Ashkan Dejagah, which really doesn’t say too much. Mauro Camoranesi has a very illustrious CV, but he’s well past his best.

The obvious one is in the center of midfield. Gentner can play there, but he’s not half the player that Khedira is in that position. They’ve left a huge gap in the midfield next to Kuzmanovic, and they’ve got very little in terms of creativity coming from wide areas.

But where am I going with all this? Everyone knows Stuttgart have been awful this season, except for that game against Gladbach where they won 7-1. What I’m trying to say, though, and while many will at first disagree because it’s still so early on, I do believe relegation could be a very real possibility for Stuttgart if they fail to pick up the pieces. We can use Hertha Berlin as an example.

Before their relegation season in 2009-2010, Hertha Berlin finished in fourth in the 2008-2009 season, and pushed for the title until the end. One year later, and they were down. Let’s look at the transfers. In the summer transfer window previous to the 2009-2010 season, Hertha Berlin lost a host of their best players. Marko Pantelic, Josip Simunic, Marko Babic and Sofian Chahed all left the club, and the Hertha BSC backroom staff did a very poor job of bringing in quality replacements. At the end of September, Hertha sacked manager Lucien Favre for an awful start to the season which left them in 18th place, where they would ultimately finish. Hertha Berlin were relegated with 24 points from 34 games, and with only five wins. That’s nearly one win for every seven games played in the Bundesliga. Currently, Stuttgart have one win from seven.

Uli Hoeness and Karl-Heinz Rummenigge can complain about Bayern Munich playing poorly, Felix Magath can bemoan his side’s defensive errors, and Steve McClaren can rue missed opportunities, but no one should be more worried than Christian Gross right now because Stuttgart are in a situation that certainly won’t be an easy fix.