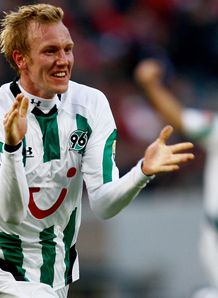 Attacking Midfielder Jan Rosenthal Puts His Side 1-0 Up Against Frankfurt.

A resilient Freiburg side, who have now racked up three straight wins, came out of Frankfurt with a 1-0 result that they will be very content with. Freiburg’s ability to be able to grind out a result is really an asset for a side that were expected to fight relegation this term. Freiburg defend deep, play patiently, and wait for their opportunity. Fortunately for them, they have players in the side who will take their chances when they come.

Freiburg finally took the lead when Jan Rosenthal smashed the ball into the back of the net following a quick passing move from Maximilian Nicu. Freiburg had at least three other chances earlier on in the game to take the lead, but the usually clinical Papiss Demba Cisse was unlucky not to get his name on the scoresheet.

This result puts Freiburg in third place ahead of the games on Saturday, which is nowhere near where I thought they’d be, although it still is very early in the season. Freiburg have picked up nine points from their first four Bundesliga matches, and when you consider some of the opponents they have beaten, they really have been quite impressive.

Frankfurt had just come off a 4-0 win over a Gladbach side who looked absolutely confused in defense, but could not continue their high-flying form at home against Freiburg. Frankfurt’s next match is away to Bayer Leverkusen, and that will likely be another three points dropped. Freiburg, on the other hand, will host a desperate Schalke side on Wednesday night, and they will definitely have their eyes set on another three points.