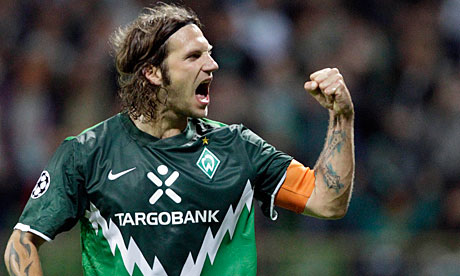 Torsten Frings Will Have A Tough Task Against Huddlestone And Palacios.

The Champions League kicks off with group stage matches which will pit top teams from all over Europe against eachother in pivotal clashes that could mean a place in the round of sixteen or an early exit from European competition. Bundesliga contenders Werder Bremen and Schalke will kick their Champions League campaigns on Tuesday against the English Premier League’s Tottenham and France’s Ligue 1 respectively.

Werder Bremen have been on fine form lately, and were even unlucky to leave the Allianz Arena without three points this weekend against Bayern Munich. Bremen will host Tottenham and will be looking for three points against a team who will definitely be competing with them for a place in the round of sixteen. Bremen’s group is a very difficult one, which also includes Champions League winners Internazionale and Twente Enschede of Holland, as well as tomorrow’s opponents Tottenham Hotspur. Werder Bremen’s Marko Marin will be crucial to the Bundesliga side’s success against Tottenham, because Marin’s technical ability and pace will really test Tottenham’s back-line. The strength of Almeida and Pizarro up top, as well as their aerial ability, will also provide a stern test for Tottenham who lack a center-half with any real height. Here are some possible lineups:

Werder Bremen will be without first choice center-halves Per Mertesacker and Naldo, and will also be forced to play veteran defender Mikael Silvestre at left-back. Fortunately, the rag-tag defense has stood strong, as proven against Bayern Munich on the weekend.

Tottenham, on the other hand, have been especially poor domestically and will be looking to bounce back against Werder Bremen, although it’s unlikely away from home. They’ve got quality players in the side, and their firepower could really test Werder Bremen’s backline, but I doubt they’ll pull off a result in Germany. Here’s a possible XI:

Lennon’s pace could really tear Silvestre apart, and he will really need to defend deep if he has a chance at all against the pacey winger. Gareth Bale, down the left side, will look to supplement attacks and double up against Fritz at right-back. Kranjcar will look to cut inside from wide areas and play the ball into forward players, acting as the playmaker in the side because of Luka Modric’s injury absence. Tom Huddlestone and Wilson Palacios will look to hold the midfield and keep possession, but will find it a tough battle against Torsten Frings and Philipp Bargfrede.

I can see Bremen edging this match, despite Werder Bremen’s defensive woes and Tottenham’s heavy firepower. 2-1 to Bremen.