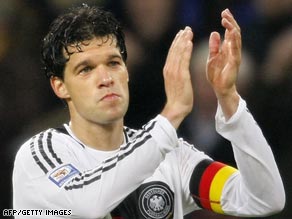 Ballack Is Captain Once Again But Must Fight For His Place In The Side.

Joachim Loew has announced that veteran midfielder Michael Ballack will remain the captain of the German national team and has thus ended all debate surrounding the issue. Despite this, Loew has not chosen Ballack for Germany’s two upcoming European Championship qualifiers against Belgium and Azerbaijan, and has not promised him a place in the squad for Germany’s next round of qualifiers.

I have previously written that I think Michael Ballack should not be granted the captain’s armband because of the wonderful job Philipp Lahm did while wearing the armband during the World Cup. At first, readers may expect me to simply disagree with Loew’s decision to stick the armband back on Ballack as he once again becomes eligible for a national team call-up after fighting through the injury that ruled him out of the World Cup in the first place. Loew has been very clever with his words on the issue, and it’s in his words that comes the new topic for discussion. Loew spoke to the press on the issue and said;

“After a personal meeting and open, faithful discussions [with Ballack], I have decided that Michael will keep the armband. Philipp Lahm , who filled the role so brilliantly during the World Cup, will remain the deputy captain. At the moment,  Bastian Schweinsteiger and  Sami Khedira are first choice in defensive midfield. I frankly told him that he’s not ready yet and that the World Cup has created a new situation. But if Ballack comes back and finds his way into the team, he will be captain, too. If Ballack doesn’t play, Lahm is captain.”

Loew has decided that after the impressive performances of Sami Khedira and Bastian Schweinsteiger as a midfield duo during the World Cup, they will keep their places in the team as they rightly should. Khedira will be looking to continue impress at Real Madrid this season, as well as with the national team against Belgium and Azerbaijan. Bastian Schweinsteiger has essentially guaranteed himself a place in the midfield with his stellar World Cup performances and excellent Bayern Munich form. With Christian Traesch, Thomas Hitzlsperger and Simon Rolfes being three of many other players who will be vying for those positions, Ballack will certainly need to put his work in to fight his way back into the squad.

Now, Loew has also said that Lahm will be captain if Ballack does not play. Lahm will surely take the field against Belgium on Friday and Azerbaijan on Tuesday, so nothing would have changed at all. If Ballack does not regain full fitness and form before the next round of qualifying matches in November, then Loew may not call Ballack up at all. At 34 years old, Ballack’s contributions to the German national team have been nothing short of fantastic, but it’s hard to see what more he could do for die Mannschaft than to allow some of Germany’s younger players to flourish in the side without him.

Loew has massaged Ballack’s ego by announcing that he is the captain of the national side, but has also been very clever in not choosing Ballack for his squad for these next to qualifiers which will allow Lahm to remain captain and create a consistent atmosphere in the German camp.