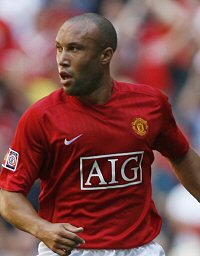 French center-half Mikael Silvestre has today signed a two-year deal with Bremen after being released by English giants Arsenal this summer.

Silvestre’s experience could prove vital should Werder Bremen experience an injury crisis as the season goes on. While he is not at the level he once was, he will be helpful back-up to starting center-half pair Per Mertesacker and Naldo. Silvestre can also slot into the left-side of a back-four, but will hold his position instead of advancing down the wings to support attacks as we have come to expect from players defending on the flanks.

Silvestre’s career is a long and successful one, with his most impressive stint coming at Manchester United, where he played for nine years. At Manchester United, Silvestre won four Premier League championships, an FA Cup, a Carling Cup, two Community Shields, a Champions League trophy, and an Intercontinental Cup.

Having a player in a side as young as Werder Bremen’s who will bring a winning mentality and a great amount of leadership will certainly bring some continuity and stability to the side. While he may no longer be a great force out on the pitch, in the dressing room at half-time and on the training pitch during the week, he will be at his most useful for Werder Bremen.

Silvestre spoke about his move to Werder Bremen in an interview with the club’s official website and said, ‘I’m very satisfied to have signed a contract at Werder Bremen. This is the start of yet another foreign adventure for me. I will do my utmost to adapt to my new surroundings as soon as possible and will try to help the younger players at the club.’