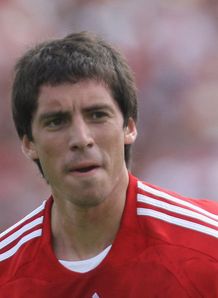 Argentinian midfielder Jose Sosa has today completed a move away from Bundesliga champions Bayern Munich after failing to break into Louis van Gaal’s side in recent times. Sosa will play his club football at Serie A side Napoli this season, where he will look to get his career back on track.

Jose Sosa joined Bayern Munich from Argentinian side Estudiantes in the summer of 2007, after being signed by current Switzerland manager and Bundesliga legend Ottmar Hitzfeld. While other top European sides were interested in the creative attacking midfielder, Bayern Munich beat the opposition to his signature.

After Hitzfeld’s departure from the club in the summer of 2008, Sosa lost his place in the side. Franck Ribery was making headlines in the Bundesliga, Hamit Altintop was competing for a place, and Bastian Schweinsteiger was improving with every match. Sosa was immediately a fringe player, and it only got worse when Bayern Munich invested in Arjen Robben.

At the start of Bayern’s successful 2010 season, Jose Sosa was loaned back to Estudiantes by Louis van Gaal, who decided the young Argentinian would not be a part of his first-team plans. Sosa impressed, scoring goals and creating them in quantity.

With van Gaal still unimpressed, Sosa has moved onto Serie A with Napoli for a fee of around 3 million Euros. It is believed that the competition of Toni Kroos and Thomas Mueller in midfield has forced Sosa to move on in search of first-team football.