Joachim Loew And The Case For Four More Years

Loew Has Proven His Worth On The Biggest Stage In World Football.

Germany’s head coach, Joachim Loew, who served as assistant coach to Jurgen Klinsmann at the 2006 World Cup tournament in Germany, has been performing small miracles with the German national team at this summer’s World Cup tournament in South Africa. There is definitely an argument to be made about him signing on again for another four years as Germany’s head coach after all he has already done for the national team.

Many in Germany had little faith that Die Mannschaft would advance much further than the Round of 16, but under Loew’s guidance, the side has blitzed into the semi-finals and have a great chance now of winning the tournament.

After Ballack’s injury, much was made in Germany about who would replace the talismanic captain. Many believed the ideal replacement would be to call up Torsten Frings, a reliable, warrior-like midfield player who could bring experience and steel into Germany’s midfield. Loew, though, had other plans.

In 2009, the Germany U-21 national team won the UEFA U-21 Championship. On that team, were players like Manuel Neuer, Jerome Boateng, Mesut Ozil, Marko Marin, and Sami Khedira. All of these players, despite their young age, made the 2010 World Cup team. It just goes to show that, unlike England, Germany are able to shed off old stalwarts like Ballack and Frings and replace them with vibrant young players who will get the job done. 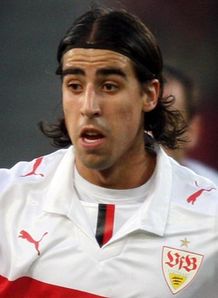 Khedira Is One Of Many Young Stars In The German Side.

Sami Khedira captained that U-21 side to the title in 2009, and was Loew’s choice to replace Ballack in the midfield. Many criticized Loew for choosing a player so inexperienced on the international stage, despite the U-21 championship and a title at Stuttgart. Khedira, though, along with his partner in midfield Bastian Schweinsteiger, has been sensational. The young Stuttgart man has been tidy in the tackle and superd in possession, and has been pivotal in successes over England and Argentina.

Loew didn’t stop there, though. He continued to raid the German youth system, and called up Holger Badstuber, Thomas Mueller and Toni Kroos, who were all too young to be eligible for the U-21 side in 2009. The incredible thing is the step these players have made, from playing reserve football for their clubs to becoming international footballers at the world’s biggest stage, the World Cup.

Loew’s willingness to rely on the youth of German football to provide results at the highest level could have totally backfired. But, he has them extremely disciplined and determined to succeed. They do not seem distracted by very high wages or flashy cars, they seem totally focussed on the task at hand; bringing glory to their country by winning the World Cup.

If Loew can continue bringing in these sensational younger players, a new golden age is German football is just around the corner. Thomas Mueller, for example, already had four World Cup goals at the age of 20. In 12 years, he will only be 32, Miroslav Klose’s age. Just imagine how many World Cup goals Thomas Mueller could have after four World Cup tournaments. The future of so many of these young players will be incredible to watch unfold.

It is not just Loew’s ability to bring out the best in his young players that should warrant him a new contract, but also his tactics. Joachim Loew’s counter-attacking football has been a joy to watch, and that’s almost an oxymoron. But, the fluidity of play from Germany’s defense all the way through to their attack is just mesmerizing. Their opponents will press Germany right into their own half, even sometimes right onto their own 18-yard box, and then it will all happen. Friedrich will win the ball off of an opposition forward and burst into the midfield with a surging run. He will play a quick pass into the feet of Bastian Schweinsteiger, who switches wings to Thomas Mueller. Mueller pushes inside, and cuts the ball across the box and into the path of the on-rushing Mesut Ozil, who slips a pass into the feet of Lukas

Could A New Golden Age Of German Football Be On The Horizon?

Podolski just inside the opposition penalty area. 1-0. The speed with which the German team move from defense to the back of the opposition net is just astounding. It’s as if they know exactly what they’re doing every time they break away. Everytime they win the ball, they know exactly where to go and how to break the opposition down. It’s almost without thought, without even having to look up and pick the pass. It’s like clockwork. This must be down to Loew’s coaching style and Loew’s training excersises, being able to bring such discipline and ruthlessness onto the pitch.