The England Outsiders #5. The Strikers

2006 was a disaster for England’s much vaunted strikers in so many ways it was depressing. It was clearly Sven Goran-Eriksson’s nadir as the England supremo as his eccentric choices left England woefully short of options. Michael Owen was so off the pace as to be redundant and his World Cup collapse when he ruptured his cruciate ligament against Sweden. Wayne Rooney’s frustration blew up in the Quarter-Final when he was sent off for stamping on a sensitive are of Ricardo Carvalho and Peter Crouch tried his best but simply couldn’t carry the teams striking options. As for Walcott, he may as well have stayed at home.

Fast forward 4 years and things despite the odd injury scare here and there are much rosier for Fabio Capello. Wayne Rooney is in the form of his life, Jermaine Defoe has made himself a crucial member of the squad, Peter Crouch’s reputation is more positive and certain players are jostling for the remaining squad places. The question is, who will make up the 5 strikers that Capello should choose as his options up front.

There’s no point discussing Rooney and Defoe. They’re on that plane unless something incredibly cruel happens but the 3 other positions are a free for all. Certain players over the last 18 months have made cases to be included but some will face the cruelest cut of all and miss out on a chance of going to South Africa. It’s those strikers I’m focusing on and deciding just who should join the first two names I’ve mentioned.

Yet, I have to say that it is some relief that Michael Owen is injured. Surely I can’t be the only person who was sick of his constant bleating in the media week after week. Capello rightly judged Owen to be damaged goods and whilst no-one can doubt up to 2005 he was one of the Premier strikers in world football, he is no where near the level he was. Capello knows that Owen simply cannot cope with the demands of top level football anymore, which is a shame. Owen will probably never add to his goal tally for England, which currently stands at 40 and it is a sad way for his career at international level to finish. It looked for years as if he would smash Bobby Charlton’s record, but that achievement looks set to become Wayne Rooney’s mantle. With Owens absence, the stage looks set for someone to come in from the left field but surely the highest scoring English striker in the Premiership, Darren Bent.

With 24 league goals this season for Sunderland and pace to burn, Bent should be a shoe-in but something just seems to rub people up the wrong way with him. In any other country, Bent would probably be in the squad without doubt. He reminds me of Mario Gomez, the German striker, who scores goals for fun in the Bundesliga but has yet to find that form at international level and his goals have all come against lower rated international sides. 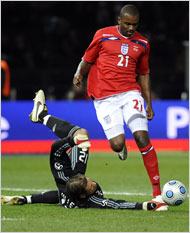 Should he be there? Yes, he should and I don’t feel he’s had a fair crack of the whip internationally. He deserves a chance to go to South Africa this summer and you have to wonder just where Sunderland would have finished this season without his goals. Of the target men that Capello seems to use, Emile Heskey, Carlton Cole and Peter Crouch have all had difficult seasons but Crouch has continued to perform for England when he has had the opportunity. That alone should subside any fears that his absence from the Tottenham starting line up may have and I’ll be amazed if he isn’t one of the picks up front.

Cole has been involved in a dreadfully difficult season at West Ham United and he is not alone at Upton Park in seeing his form suffer. Heskey has meanwhile seen his form go up and down as Aston Villa have continued to prove that they are back as a consistent challenge at the upper end of the table. Heskey does so much for his team mates that I’m sick of trying to explain why strikers don’t have to score goals to be good.

It’s not been the easiest season for his team mate Gabriel Agbonlahor either, but Villa are still chasing down 4th place in Premiership. For all his pace, he’s still too wildly inconsistent for me at league level never mind international level. I wouldn’t take him if I had a fit Darren Bent to choose.

Of the other two options, both would usually be laughed out of hand, but this season has seen both of them receive praise that has been short throughout their careers. Firstly, Bobby Zamora has had the season of his life at Fulham and has been touted as a possible option for England but he seems to have been patched up more than the 6 million dollar man over the last few weeks. He apparently needs an operation but Fulham have delayed surgery until the England World Cup squad has been announced. I’m sorry Bobby, but I just think there are better options available.

The other choice, may make you laugh, but I think it’s a disgrace he’s never been picked for England. Bolton Wanderers fans will tell you just how good this lad has been for years, but Kevin Davies is so underrated it’s become something of a joke. Yes, he perhaps doesn’t score as many goals as he should but his work rate, strength and technical ability are consistently overlooked. If Crouch wasn’t fit to play, he’d be my first reserve.

So the five strikers I’d take are, Wayne Rooney, Jermaine Defoe, Peter Crouch, Darren Bent and Emile Heskey. What do you think? Who would your choices be? Please leave me your comments as usual.