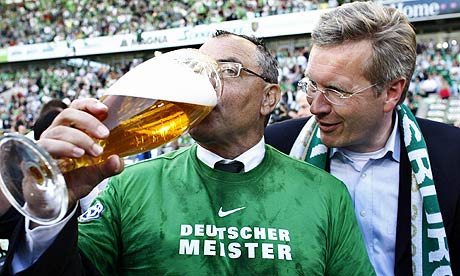 So perhaps this is where we should be.

Two giants of German football locking horns for the title.

Bayern Munich have won 5 of the last 9 championships. Magath has won 3 of the last 5, is responsible for 2 of Bayern’s 5 and even led Stuttgart to 2nd in the past decade. Bayern win because the are supposed to win. Magath sides win because they are the best conditioned. One is the biggest club in Germany and the fourth biggest club in the world. The other is probably the best manager in the world outside of Alex Ferguson and Fabio Capello. So will Magath win his 3rd championship with 3 teams? Or will the Bavarian giants do what they so often do?

A weekend of upsets led us to this titillating finish, with Schalke now just two points behind Bayern in second. With Bayer Leverkusen losing to Nuremburg 2-3 to record their first lossof the campaign, the reality of that record being predicated on too many draws is hitting them squarely now. While any non-partisan might have help hope for the Werkself to throw off the shackles of their bridesmaid mentality to win their first title, the gravity of history seems to have sunk the young squad. Even trainer Juup Heynckes has hinted at such today.

Meanwhile, Bayern forgot that Cologne are absolutely pants just like Lukas Podolski forgot that he is a farce. Most surprisingly, a crowd that so easily turns on its team decided to play 12th man for the first time in ages. The result was possibly the biggest surprise of the 2nd half of the season as Cologne pulled themselves six points clear of the drop with a 1-1 draw.

It could be that the deciding factor in this year’s title could be the Champions League as Van Gaal will be forced to tinker with the superior squad, as he did Saturday in anticipation of their mid-week trip to Florence, as long as they last in Europe.

Despite the talk being about Magath, we should start noticing that a very good collection of players (many still remain from the 2007 runner-up season) has started to play like a team rather than individuals. Despite losing captain Bordon, they went to Frankfurt and soundly beat the surprise team of the campaign 4-1, using four different goal scorers. For once the air of inevitability with regards to Schalke isn’t about what the won’t do but what they can do. People are starting to believe that Schalke can win this title, and as Bayern Munich can attest, the most important factor in any campaign can often be how you and your opponents regard you. The truth is that many games are won before the ball is kicked and Schalke via Magath will start to win games solely on the mystique of their manager.

Perhaps it all comes down to Saturday the 3rd of April when Bayern travel to Gelsenkirchen to face the Royal Blues. And maybe more for Bayern than Schalke, because Schalke will only continue to get stronger. They’re due for a winning streak. Bayern seem to be tailing off of one. And with a decent chance in Europe, Bayern have more on their plates than the Royal Blues. Anything less than a win out west could be costly for Bayern.

So sit back and enjoy. Typically the best seasons happen when Bayern are weak, but we might get a title run worthy of 2007 Stuttgart or 2009 Wolfsburg with Bayern being very strong.