There is a new book to add to the pantheon of German football books. 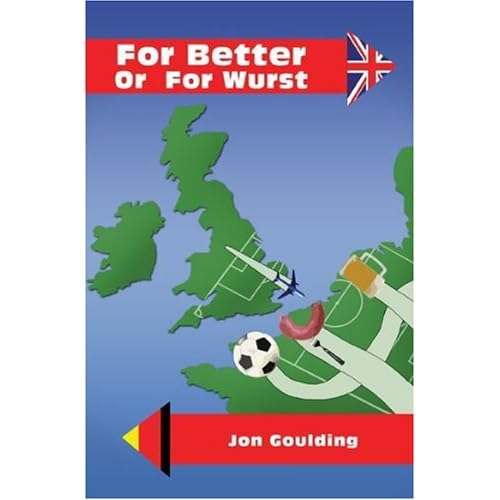 Jon Goulding (pronounced Gold-ing) is a Port Vale supporter living in Cheshire England. He was introduced to German football by his father-in-law, and fell in love with 1.FC Nürnberg. After attending a few games, Jon turned his mates onto the the delights of German football, beer and Bratwurst. And soon they form the British-based 1.FC Nürnberg fan club.

His new book, For Better or For Wurst is a compendium of his travels to Germany to watch his beloved 1FCN, including his first derby, the disastrous relegation campaign of 07-08 and the Cup in 07, as well as the formation of their supporters club. In total it covers 3 seasons and about 25 live matches as well as his constant travails to follow Der Club.

Here is an excerpt:

An empty stadium silently echoes with the events and legends of the past. Whether major or minor, global or local in scale, the ghosts of ‘those days’ creep into the imagination of the observer. The performances and performers, the spectators and the enormity of each occasion crackle through the static of the years as one desperately tries to imagine a long gone scene. Conversely, a full stadium fuses the past with the electricity, anticipation and excitement of the present.

To be standing in Berlin’s Olympiastadion would have been, as sports fans and tourists, a moment to reflect on the grand history of the place. Reflection on the famous ‘Nazi’ Olympics of 1936 and the four gold medal haul of Jesse Owens. And how about, albeit less significantly (unless you are French, or Italian for that matter), Zinedine Zidane’s World Cup Final head-butt on Marco Materazzi? Moments and people now etched into the stadium’s memories for eternity.

That the time for such reflection on the past was only fleeting was due to the magnitude of the present. Not on a global scale, maybe not even on a national scale and certainly without much interest beyond the borders of Germany. But in the Franconian and Schwaben areas of southern Germany, for the thousands of fans on the fan mile stretching westwards from Berlin’s Brandenburg Gate, and for the 74,400 fans in the old stadium itself, for that afternoon the significance and spectacle were difficult to surpass.

Three decades of living away from his native Germany and four decades in the footballing wilderness for his hometown team had somewhat hardened Herbert Schauer to the emotions of football. However, to be standing (for despite the provision of seats, that was how it was to be for most of the game) with fellow Franconians in this temple of sport was something of a spiritual experience. To be sharing this with his daughter and British supporters of ‘his’ team was a personal high after all of those years of support in exile and support in isolation. Thirty years of lone moments of despair only punctuated by the occasional, and all too often cruel, false dawn of impending success.

You can follow Jon at jongoulding.com and the supporters club at their Official Site.