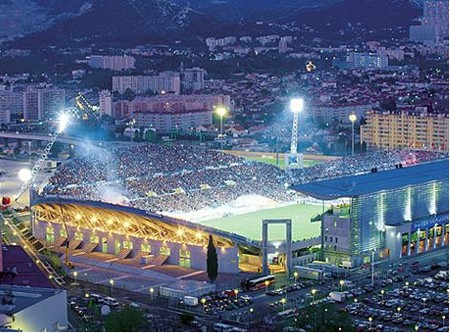 Fox Soccer’s coverage of the Champions League games is something to behold. No longer are we tied to ESPN’s choice of which game we are allowed to watch. 10 of this week’s 16 matches are available either live or on a delay. That is unbelievable, and a massive step forward.

It poured rain throughout the game in Marseille on Tuesday, and Milan’s white Champions League kits do not have a sponsor. It’s a good thing this isn’t the women’s champions league. Or maybe it isn’t. Pato, Pirlo and Flamini all play an attractive style of football and I was excited to see what they could do against Marseille. Early on, the cameras caught Ronaldinho chewing gum on the bench. That certainly won’t help him in his losing battle to appear less ugly.

The two man announcing booth did a good job calling the game. They were never overbearing, but they added comments and descriptions when needed. The Marseille crowd was consistently into the game, singing in full voice throughout the downpour. Milan is an excellent passing team. If they only had the youth to take advantage of such gilded opportunities, they could be a force in both the scudetto race and Europe. Clarence Seedorf had a nice dribble towards goal, then set up Pipo Inzaghi for his 67th European goal in the 28th minute. Marco Storari had a massive save in added time on a shot from Cheyrou.

Gabriel Heinze leveled the home side in the 49th minute with a nice header off a free kick that ultimately nutmegged the keeper. The crowd remained fully involved after the goal. Champions league group stage crowds are great. Manuel Flamini earned a yellow in the 61st minute for a two footed tackle that probably should have been a straight red. Marseille had more gas in the tank at this point in the gam, but their inability to advance offensively ultimately let them down. Seedorf fed Inzaghi again in the 74th minute for Milan’s second goal.

Even though the rain never let up, the pitch stayed in perfect condition. nice work groundskeepers. Milan has to be happy with the away win against a plucky Marseille side. Marseille’s problem after this game is that they’re one match down against their main rivals to finish second in Group C behind Real Madrid.