Since we are approaching the end of a decade, and since it’s summer,I thought I would offer up my La Liga Team of the decade. I set my team based on the best actual season had by a player in each position. It is not an aggregative list. It is not based on contributions over the course of a few seasons or a career. The players who had the best year of any player in the decade in their respective position are what make up this list.  Enjoy……

Lead Valencia to a league and UEFA Cup double as well as winning the Zamora trophy for himself. Was the custodian for a team who managed to combine rock solid defense with a flair for attack. Regarded as one of the premier keepers in world football at the time, this was his best season in a Valencia shirt.

Has been the best right back in La Liga consistently since breaking into the first team at Sevilla 2004. Was a huge threat on the right flank as Sevilla finished in 3rd place, only 5 points off champions Real Madrid. Won the Copa del Rey,as well as a second successive UEFA Cup that year. This was the season that established him as the premier attacking full back anywhere in the world.

Defender: Roberto Ayala (2001/2002)
One of the best defenders of his generation, Ayala showed A.C Milan what they could have enjoyed had they showed some faith in his incredible timing and reading of the game. A tough customer in defense, Ayala demonstrated class and leadership by leading Valencia to their first Liga title in 31 years. Also named Champions League defender of the year as Los Che lost in the final to Bayern Munich. 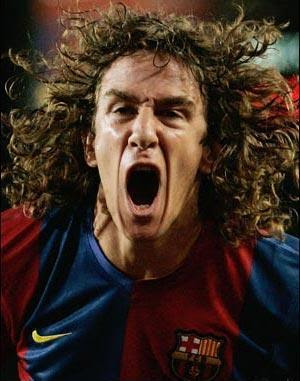 Not the prettiest man in the list, nor the most technically gifted, but no one exemplifies heart more than Carles Puyol. Catalan through and through, Puyol showed why he was the deserved captain of the club as he balanced the potent Barcelona attacking power with his sound defensive abilities. Always one to jump into a tackle, Puyol makes up for his sometimes questionable decision making with his unique ability to hustle a ball out of danger on pure desire alone. Captained Barcelona to a second successive Liga title that year as well as a Champions League title, in which he was named UEFA best defender. No player represents what their club is more than this man.

Came within two points of emulating his father by winning a Liga title with Real Sociedad, this was the year Xabi Alonso broke out. Xabi was the complete central midfielder, exhibiting uncanny positional sense, an ability to win the ball in tackles, as well as a knack for great ball distribution and a cannon for a right foot. He helped put Sociedad back on the football map(albeit briefly), and went on to claim the best Spanish player award courtesy of Don Balon. Real Madrid may have won the league this year, but all the success Xabi later enjoyed with Liverpool and with Spain was born here.

Forget about galacticos, this was the guy who lifted Madrid to the heights they enjoyed in the first part of the decade.  His departure to Chelsea in the summer of 2003 was seen as the scourge that caused the dramatic downfall of the first galactico area, a sentiment shared by former teammates Zidane, McManaman and Hierro. Makelele was a rock, managing the defensive load all the way to a Liga title against a pesky Real Sociedad team. Fresh off a Champions League title the year before, Makelele had to deal with increasing pressure as Madrid’s unbalanced side was top heavy with attackers. But he danced the dance ever so well, and wasn’t truly appreciated by Madrid, nor most Liga fans until he had departed for Chelsea. Solid, solid, solid.

One of the most enigmatic figures in Spanish football ever, when he was on his game no one in the world was better. Consistency has been the main hindrance his entire career, but for two magical years in the then unknown Villareal, he brought a tiny club to the brink of European glory. After a dreadful first European season at Barcelona, coach Manuel Pellegrini had enough faith in the precise passing ability of this temparmental Argentine, and built an entire squad around his abilities.  A 15 goal haul, coupled with a 3rd place finish made this Riquelme’s crowning achievement in Spain. Not too many players can place the title of artist in front of their name, but surely he is one who can.

This was the year Ronaldinho established himself as the best player on the planet. I would call you a liar if you said you weren’t put under his spell, even if it was for a short period of time. He did it all. He brought the Liga title back to Catalunya that year, which helped him earn his second consecutive FIFA Player of the year award as well as his first Ballon D’or. His recent fall from grace and form is made more sad when you consider the heights he reached only a scant few years back. His style and flair were breathtaking, his technique and trickery were out of this world, and his smile and enjoyment of the game was unmatched anywhere. Ronaldinho was one of a kind, and this season is what pushed him into the stratosphere of footballing transcendence, a feat only achieved by a select few before him.

The greatest player of his generation, Zidane finally completed the holy trinity of  football prizes by taking Madrid to a record 9th Champions League title with one of the greatest goals ever scored in a major final. After arriving in Madrid as the most expensive player ever, Zidane didn’t disappoint in this, his first year in Spain. Although Madrid were disappointed to finish third, their concentration on winning the Champions League in their centenary year was no doubt a factor. Zidane justified every one of the 76 million euros spent on him. Although he didn’t enjoy the amount of domestic success he did later on in his Madrid career, the fact that he delivered such a beautiful product on the field in his first year in Spain makes me rank this as his best Liga season. The most elegant man ever to caress a football with his feet.

I realize La Liga has played host to some glamorous forwards who have had solid seasons and won trophies with their respective clubs this past decade. However, no one has had the same impact as a relative unknown in their debut full season in Spain as Nihat did. After arriving from Besiktas during the winter transfer break the year before, Nihat only managed to net 1 goal in 11 appearances for Real Socieadad. This made it all the more unexpected when he scored 23 goals the following year as Sociedad came within a whisker of winning the most improbable of La Liga titles of recent memory. Finishing tied for second in the Pichichi that year, his goals skyrocketed Real Sociedad to heights it hadn’t seen in a long time. While definitely not a flash in the pan, the rest of his stay in Spain was marred by injury and he never quite rang the bell like he did in 02/03.  Brilliant strikers came before and have come since, but no one goal scorer has had more of an impact on his teams success than Nihat did in that magical year where the title almost returned to the Anoeta.

The world at his fingertips, Leo Messi did it all this past season leading Barcelona to one of the greatest seasons in the history of club football, period. After making his Barca debut in 2004/2005, it was evident Leo was destined for greatness. There were flashes of brilliance, too many to list, but he was always in the shadow of Ronaldinho, as well as being prone to injury. This past year was when the full brunt of the weight of expectation fell on his slight shoulders, and did he ever deliver. 23 goals, the treble, and all around mind blowing play from a legend in the making. Messi handled the pressure of being the big dog at the Camp Nou amicably, and looks set to follow a hallowed path to greatness traveled only by a select few.