Well the title is finally wrapped up and now La Liga’s attention will focus on the races for European cup spots as well as to see who stays in the Spanish top flight and who does not. Also the race for the Pichichi will have a very interesting turn in the days and weeks ahead.

Barcelona were given the honor guard in Mallorca, although they would end up losing after former home team star (Eto’o) missed a penalty in the dying moments of the match. The game was played with little intensity and even fewer starters for the newly crowned champs. Real Madrid made this all possible after they equalized against a Villarreal side that was vastly superior throughout the 90 minutes. Gonzalo Higuaín would make the match 2-2 even though he and two of this teammates were clearly offside. Justice would come in the form of an Iker Casillas error. The Spanish international came out badly to get a corner, but instead he tapped it back, putting the ball square on Joan Capdevila’s foot for the game-winner.

Espanyol is a point away from saving themselves from relegation, while Atlético rebounded with a big win against Valencia. 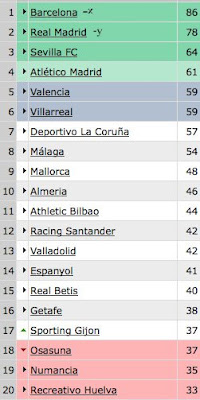