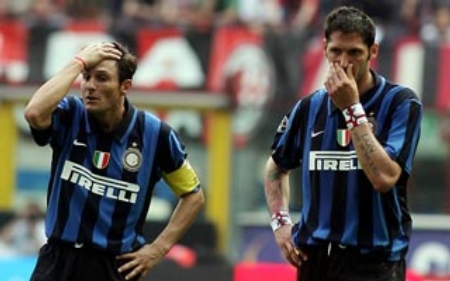 Diego Maradona’s son-in-law has already been linked with a move to Inter and if I were Jose Mourinho I would have this guy signed by now. The Argentine’s talent is undeniable and he has outgrown an underachieving Atlético Madrid. As a person who has championed a playmaker in the middle behind the strikers, Aguero would be a good fit. Mourinho hasn’t really had a playmaker in the middle since Deco from his days with FC Porto. That turned into Mourinho’s Champions League title.  Even Kun Aguero’s father-in-law has suggested that he make the move to Inter.

Let’s be honest here, Eto’o is the best striker in the world. As a Barca fan, I don’t want him to ever leave the Camp Nou but if he were to leave I’d want him to play for Inter. Eto’o is big in Champions League, La Liga, Cameroon whatever competition he’s in he scores goals and he scores a ton of them. Barca is working hard to re-sign the star striker but he could be the perfect compliment to Ibrahimovic up front.  Real talk, Ibra isn’t nearly as clutch as Eto’o.

Adding those two players would make Inter faster and more skillful in their attack.  The reason Inter hasn’t been able to go all the way in Champions League is because they don’t have consistent speedy attacking players to breakdown the quality defenses they encounter in the knockout stages.

Mourinho can coach defense, that’s not a major problem but this Inter squad has to strengthen its attack and what better way than with Aguero & Eto’o.  Nerazzurri have to do something this summer to improve the squad in order to seriously challenge for the Champions League next year.

Its wishful thinking for sure for Inter fans but wishes are meant to come true.

Who should Inter Milan acquire over the summer?
( polls)