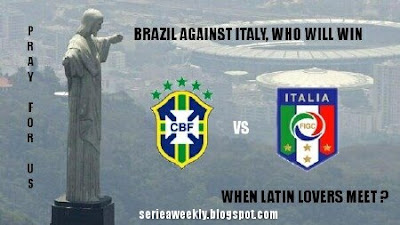 Kickoff for today’s international friendly will be at 7:45 pm London time, and 2:45 pm on the east coast in North America as the Azzurri take on Brazil in a high profile friendly at the Emirates Stadium, the home of Arsenal

Kaka will miss this encounter as well as compatriot Amauri who received a late call-up from Brazilian manager Dunga but was blocked at the club level by Juventus, as was their right to do so.

Amauri’s Juventus teammate Mauro Camoranesi travelled with the Italian side to London and will make a surprise appearance for the Azzurri. It is still unclear if Mauro will play today but good to see him back after injury and should he play he will start along side Bayern’s hitman Luca Toni and Villarreal’s Giuseppe Rossi both set to feature.

Four time World Cup Champions Italy will be hoping for their first win over five time Champions Brazil since the 1982 World Cup Final.

7 out of 11 of the starting eleven for Brazil currently play for Italian clubs.