Barca To Make US Return

Barcelona decided to challenge the Premier clubs in the United States and become the brand of choice in one of the most untapped soccer markets in the world.  The club announced on Christmas Eve that they will be making a return trip to the US instead of going to Asia on an alternate basis as they originally had planned. The decision was mostly based on the alliance that president Joan Laporta made with Bolivian magnate Marcelo Claure to make a bid for an MLS expansion side in the city of Miami. 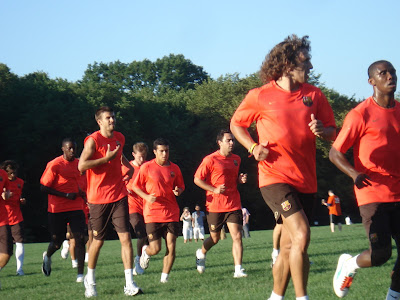 The provisional plans have the blaugrana playing a friendly match in the Magic City in order to promote the intentions of FC Barcelona there.  The match would most likely take place in the team’s eventual home- Florida International University Stadium.   In addition to Miami, the Barcelona tour will also make stops in Los Angeles and Seattle.

Last year Barca came to the United States and they made stops in Chicago as well as in New York City.  The latter included a training session in Central Park (if you have pics of this please send them to La Liga Talk).  In their stops they played against Mexican side Chivas and MLS runner-up New York Red Bulls.

*** Thanks to Kevin from Unprofessional Foul for the pics.***