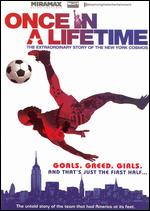 Miramax Films, “Once in a Lifetime The Extrodinary Story of the New York Cosmos” is a must have for any Soccer fan in America. It will be released on DVD October 3rd. My full review of the film from when it was in the theaters this summer is in the comments section.