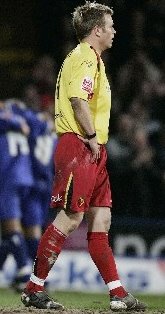 EPL side Watford FC rewarded American defender Jay DeMerit with a contract extension and an undisclosed bonus Wednesday. DeMerit did not ask for the bonus but was rewarded with two other “cornerstone” players (Gavon Mahon and Al Bangura) by the club. Despite Demerit’s outstanding play in England he still hasn’t recieved a US National Team call up. Hopefully the new coach of the US Men’s National Team will realize that DeMerit, one of the few Americans who has become a franchise type player in Europe is worth taking a look at.

DeMerit proved in the playoff match with Leeds United that he can stand tall under pressure scoring an early goal and then playing outstanding defense to preserve a Watford victory and a ticket to the EPL. The club has rewarded him for his work and now so should the US National Team with a call up!
Image from Watford FC Website