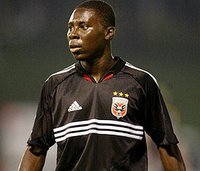 DC United’s teenage sensation Freddy Adu has not ruled out playing for SPL giants Celtic in his career.

The 17-year-old is currently one of the world’s hottest properties and has been linked with some of Europe’s finest.

However, Adu has been sold on Celtic and has conceded he would be interested in playing for The Bhoys.

The Ghana-born USA youth player regards Gordon Strachan’s side as being bigger than arch-rivals Rangers.

“To be honest, I regard them (Celtic) as the biggest club in Scotland,” Adu told the Daily Record.

“Celtic are bigger than Rangers and they are in the Champions League pretty much every season.

“I have been dreaming about playing in England or Spain and maybe Germany. But Scotland might be good, too. So no, I wouldn’t count Celtic out.

“It’s not every day you get to play against a team like Celtic and I wanted to make the most of the opportunity.”

Adu is likely to have impressed against Celtic after netting DCU’s opening goal in their 4-0 win over the SPL champions last Wednesday.

The teenager heard all about The Bhoys from ex-player Steve Guppy, who had a spell with the MLS side after leaving Parkhead.

“Steve came here bragging about his time with Celtic and because no one here had played for one of Europe’s top ones,” Adu added.

“He was always going on to websites and showing us clips of him playing for them.

“He told me all about them and that was one of the reasons it was such an honour to play against them the other night.”

WAYNE ROONEY has I pleaded for Cristiano Ronaldo to stay at Manchester United, saying: He’s my mate.

The England striker wants his United colleague, reviled for his role in Rooney’s World Cup red card against Portugal, to rethink his demand to leave Old Trafford.

Ronaldo – who faces a torrid time from fans next season – is set on a move to Spain but United are insisting he honours a four-year contract signed last term.

Rooney has told pals Ronaldo remains a friend and wants him to be a team-mate for the upcoming campaign.

A source close to the Rooney camp said: “Wayne will be absolutely delighted if Ronaldo remains at United, and looks forward to playing alongside him next season. “It’s absolute b******s that Wayne wants Ronaldo out. That couldn’t be further from the truth. He still regards him as a mate.

“Wayne has said nothing on the matter to United. He’s a bigger man than that. He’s made no moves whatsoever. He doesn’t want him to leave.”

Rooney was expected to take revenge after voicing his disgust at Ronaldo’s antics during England’s quarterfinal defeat.

The Portugal winger seemingly encouraged the referee to send off Rooney after he appeared to stand on Ricardo Carvalho.

But despite Rooney’s efforts at peace-making, Ronaldo is still adamant he wants to move, with both Barcelona and Real Madrid being touted as possible destinations.

Arsenal boss Arsene Wenger feels Ashley Cole would be better served to concentrate on his football rather than airing his dirty linen in public.

Cole whipped up a storm on Saturday morning when excerpts from his upcoming book were published in a national newspaper.

The England defender hit out at Arsenal, claiming they ‘hung me out to dry, using me as a scapegoat to get back at Chelsea’ over the controversy surrounding his meeting with The Blues last year.

Cole’s future as an Arsenal player is now in doubt again and although Wenger admits he would like to keep the left back in North London, the Frenchman feels his charge needs to focus on his duties as a footballer.

“I don’t like it when there is too much in the newspapers,” Wenger told Sky Sports News. “Football players are there to play football and not to talk too much.”

Responding to questions about Cole’s future, Wenger added: “He has two years on his contract at Arsenal and unless we sell him he has a future at Arsenal.

“I want him to stay, but there are three parties to have to want that.

“Nothing is decided yet on that front and he is an Arsenal player like everybody else.”

Wenger feels that, in time, Cole will look back on his Arsenal career with affection.

“With Ashley Cole, when one day he looks back on his career he will see Arsenal has helped him a lot and he is intelligent enough to make the difference”, said Wenger.

Brazilian coach Luiz Felipe Scolari is to stay on as Portugal coach after signing a fresh two-year contract with the nation.

Scolari was wanted by The Samba Boys to replace Carlos Alberto Parreira, but he rejected the chance to regain control of his home country.

The experienced tactician has now put an end to speculation surrounding his future by committing himself to Portugal’s Euro 2008 qualifying campaign.

Following a strong 2006 World Cup in Germany where Portugal reached the semi-finals, Scolari will be expected to take the team to Austria/Switzerland in two years’ time.

Earlier in the summer Scolari was linked as a possible successor to Sven Goran Eriksson in charge of England, although he did not want to discuss his future until after the World Cup.

With the World Cup now out of the way he has successfully negotiated to extend his stay with Portugal, which began back in 2003.