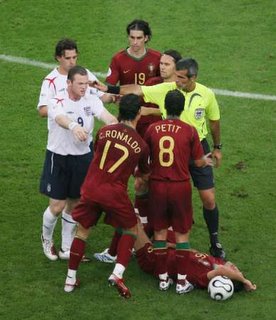 Manchester United legend Lou Macari warned Portuguese winger Cristiano Ronaldo that he [Ronaldo] had ‘a long season of abuse ahead of him if he were to stay at United.’

Speaking to presenters Rodney Marsh and Adrian Durham on talkSPORT, the nation’s only national commercial speech radio station, Macari pulled no punches when he talked of the 21-year-old Portugal star: “Couldn’t lace your boots Rodney. He’s got ability but there was an end product to your game, there was an end product to Francis Lee’s game, Bryan Robson’s game, Mark Hughes’ game…

“He’s misguided, badly misguided; his actions in the World Cup showed us that. He kept going to ground but didn’t in one game. He does what he does but he’s forgotten that the most important part of the game is winning, not what you do.”

Macari went on to say that he didn’t think there would be a problem between Rooney and Ronaldo but Ronaldo he will have lost the support of the fans. And as for United, “They won’t be saying they’ll be selling him but they’ll be thinking it,” he added. 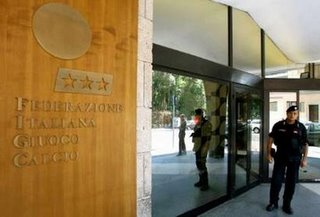 An Italian sports tribunal demoted Juventus to Serie B and stripped it of its last two Serie A titles on Friday. Lazio and Fiorentina also were demoted to the second division, while AC Milan was spared relegation but was given a 15-point penalty in the top division and will not play in European tournaments this season.

Of the 26 officials or referees implicated in the scandal, 19 received punishment ranging from the maximum five-year ban to a warning; five were acquitted; and two were banned for life without prosecution because they resigned before being charged.

The penalties can be appealed within five days to a higher sports court.

Hundreds of fans for Lazio, the capital’s other team along with AS Roma, gathered outside a Rome hotel where judges read the verdicts in Italy’s biggest sports trial.

France defender William Gallas has called the Italians ‘cheats’, after his team’s World Cup final defeat to the Azzurri on Sunday.

Les Bleus captain Zinedine Zidane was correctly dismissed for a head-butt on Marco Materazzi in an off-the-ball incident in Berlin.

But a bitter Gallas has controversially moved to defend his team-mate and alleged that Marcello Lippi’s team used underhand tactics to win.

“Italians always act like this,” he told AFP. “It is a shame to say that, but when they feel they are being dominated they try to provoke you.

“Yes, they are cheaters, but we can’t stop that. Fifa and the referees only see the second act, they never look at why there is an incident.

“I think it was very grave. When you play against people like that you want to kick their ass. It is cheating, but they are Italians.”

While reports in the French media suggest that Materazzi called Zidane a ‘terrorist,’ making reference to his Algerian roots, the Frenchman’s reaction was inexcusable and left a sour taste in the mouth after what has been an outstanding career.

Even before the World Cup there had been a lot of talk about the 23-year-old sealing a high-profile move but, after a series of sparkling displays for France, speculation has spiralled out of control.

Marseille are determined to keep Ribery but appear to be fighting a losing battle with a host of the continent’s top clubs flexing their muscles.

Arsenal, Manchester United and Real Madrid have all been linked with the youngster, while Ribery himself is believed to favour a switch to Lyon.